You are here: Home / Business / Grateful to be Serving Thanksgiving Dinner 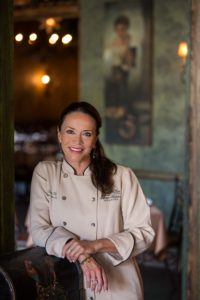 The picture of elegance and grace under pressure, restaurateur Lisa Dahl extends warmth and affection as she greets guests, friends and culinary fans. While many of us might be rattled planning for just one gourmet turkey dinner, Dahl remains poised, calm and smiling as she oversees preparations for several hundred.

“Thanksgiving is always my favorite holiday, but I’m scared to death because I don’t know how to order,” she said earlier this fall, subconsciously holding the permanently injured right thumb joint that had become a casualty of too many turkey carving seasons. “I’ve been planning my Thanksgiving dinners for 24 years, but after the 2008 debacle when I ordered for business-as-usual and nobody came, that stays within your cellular memory.”

Dahl only orders organic, free-range turkey breasts for her clientele; however, these are expensive and hard to find if you do not commit to the purchase two months out, she says. “It’s like a blind exercise. We don’t have airline travel coming back. We don’t know how many of our guests will feel the same about visiting or dining out this year.”

So far, 2020 has kept her and the Dahl Restaurant Group guessing. Early in the year, the highly acclaimed restaurateur, Sedona’s largest employer with 320 people on staff, was on track for serving half a million customers in her combined five restaurants. But as Arizona struggled to wrangle the infectious spread of the novel coronavirus, establishments had to adjust to the mandatory restaurant closure and stay-at-home orders put in place in March, followed by a limited-occupancy mandate in the summer.

“We took the time to interview employees in a more intensive way than ever before to make sure this team is stronger than we ever were,” she said. “We re-interviewed anyone who worked with us before. We have spent more time training and working with new people so we don’t discourage them or ourselves. It’s a much different process and it’s going to make us a lot stronger in every way. We feel like we have gone through really five grand openings, the way you would if you had the time to do it right. I’m so excited because we have really top performers on our team.”

While ushering in the holiday season, Dahl is building her sixth restaurant, Pisa Lisa II, a wood-fired pizzeria in the Village of Sedona in the same shopping center as her Butterfly Burger, a couture burger lounge. “It will be a larger-scale restaurant than our original Pisa Lisa [on Highway 89A in Sedona]. It was planned way before the pandemic and was supposed to have opened on the heels of Butterfly Burger, [which opened in 2019].”

Also, Dahl is putting the finishing touches on her latest cookbook with the working title, “A Romance with Food,” a project she says has been burning in her brain since the opening of her Mariposa Latin Inspired Grill in 2015.

And, she is preparing for her upcoming role as “signature chef” at Ambiente, a new “landscape hotel” elevated above the ground by steel piers, designed to blend with the environment. “I want to breathe into the essence of the harmonious surroundings with cuisine that is as unique and desirable as the innovative landscape hotel concept – creature comforts with the soul of the Southwest.”

With the promise of a creative, industrious and prosperous 2021, Dahl balances her gratitude with a mix of emotions, including sadness for those most affected by the pandemic.

“The pains, the sorrows, the tears, the toils of 2020 have made us a much stronger restaurant group. It’s been a very hard time for everyone and until we can look at this pandemic in the rear-view mirror, we will never be the same in this industry. But, we’ve learned a lot and continue to learn and be more grateful every day for what we have accomplished while getting back on our feet. That’s the one thing that can’t be underscored enough – the attitudes are so much better these days. People are much more grateful.” QCBN