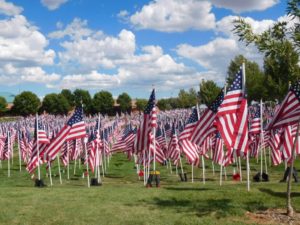 The 8th annual Healing Field and Patriot Week activities are scheduled Sept. 6-13 in and around the Civic Center, 7501 E. Skoog Blvd., in Prescott Valley. Volunteers will set up 3,000 American flags in memory of those who died during the 9/11 terrorist attacks in 2001. Nineteen flags are dedicated to the 19 Granite Mountain Hotshots who lost their lives in a wildfire near Yarnell, June 30, 2013.

Other Patriot Week events begin Saturday, Sept. 7, when the 4th annual Patriot Run starts at 7 a.m. At 9:30 a.m., Dan Vollmer of the Prescott Valley Catholic Church will lead the “Blessing of the Field.” A Children’s Patriot Concert is scheduled at 6 p.m. A similar Patriot Concert is set for 6 p.m., Tuesday, Sept. 10.

The traditional Patriot Day ceremony is set for 6 p.m., Wednesday, Sept. 11, at the Theater on the Green. Prescott Valley Mayor Kell Palguta will open the program. Interim Police Chief James Edelstein will serve as master of ceremonies.

Among the speakers will be retired Captain Patty Mack of the New York Court Officers Academy. Mack was among those who went into the Twin Towers in an attempt to save lives. Ceremonies will close with a rifle volley and the playing of “Taps” by American Legion Post 6.
Yavapai County Supervisor Mary Mallory, who until July 15 was a member of the Prescott Valley Town Council, is credited with inspiring the town to create the Healing Field.

Mayor Palguta said Mallory’s idea was that by honoring those who serve, it helps everyone understand that freedom is not without pain and suffering. He said the Healing Field reminds people they cannot forget history and the sacrifices made to protect American rights and freedoms.

PV Town Manager Larry Tarkowski said the community has created a celebration of the American spirit that “reminds us that despite differences, people yet embrace a love of country by honoring the sacrifices of those who perished.”

Town of Prescott Valley Communications Coordinator Heidi Dahms Foster said that for one week, the Civic Center grounds “become hallowed as we honor and remember those lives that were lost.”