You are here: Home / Local News / Healing Powers of the Herd 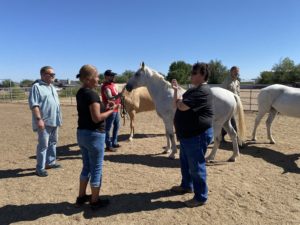 A point often proven by history: The horse has a lot to teach the human.

Contact between the two became closer when man started domesticating the horse around 4000 BC, and the relationship has evolved over time to inexorably link the two species.

Today, that link is being used effectively to bring the lessons of the horse herd into the healing process for veterans and first responders who are struggling with trauma resulting from their service.

A non-profit staged out of the Prescott area, Heroes & Horses, is using a natural approach orchestrated in outdoor settings to improve the mental health of these modern heroes through equine therapy.

“In a nutshell, horses move in herds, and this is a metaphor for veterans who have served with other veterans,” explained Ann Balowski, who founded Heroes & Horses in March of 2016.

“The horse represents a large presence that can be trusted to be honest with humans, and they demand honesty in return,” she continued. “They do not judge and do not expect anything other than honesty. Under the open sky and natural elements, there is refuge from the stresses of daily life and the comfort of an equine partner.”

According to its website (heroes.horse), Heroes & Horses helps “veterans, communities and families build confidence, clarity and connection through equine assisted learning and therapy.”

The goal is to use connectedness provided by horses in the herd dynamic, guided by experienced program facilitators, to enable these heroes “to shift their mindset from self-defeated to self-directed.”

Horses have roamed the planet for about 50 million years, and their herd instincts are strong and well developed. Although it takes patience and time for horses to begin to trust humans who are outside the herd, the two species do have a few things in common.

“Horses are prey animals and humans are predators,” Balowski said. “It is unnatural for a prey animal to allow a predatory animal to create connection and takes trust. Horses gather for safety and protection in herds – their societal construct. Humans also gather for safety and protection in ‘herds,’ such as in the military – their platoon, company and battalion. They have battle buddies, and so do horses. They have each other’s backs. When a military person detaches from their ‘military herd,’ they are often left vulnerable. Much like a wild horse that finds itself without a herd, alone, isolated and vulnerable.”

Balowski said her interest in equine therapy developed from her background in corporate America as a staff development and human resources professional. “I am a certified recovery life coach and have facilitated more than 500 psycho educational groups in treatment settings,” said Balowski, who is a resident of Wickenburg and Paulden. “My equine background comes from two very spoiled rescue mares that have been in my life for the last 16 years. I also hold four certification trainings through the OkCorral Series training program.”

The horses used in Heroes & Horses programs are not owned by the non-profit but are contracted for rent from several ranches in the Quad Cities area that also provide the facilities.

Pre-Covid, about 30 to 50 veterans were participating in Heroes & Horses programs.

But the pandemic eventually took a toll on attendance.

“The numbers dropped and we were forced to cancel retreats, sessions and individuals,” Balowski said. “The numbers have picked up. However, they are beginning to drop off due to the ‘new’ Covid situation.”

However, two promising events are scheduled for November. They are “Retreat to Regroup,” a session for female veterans, and a “Veterans Western Experience” session with trail rides, campfires and bunkhouses. Those interested in participating can visit the website at heroes.horse for more information.

Families are also part of the mix and veterans and family programs are funded through donations and grants.

Bridgette Glade, a new therapist in the Prescott area who will be helping Balowski with groups, pointed out the importance of grants. “This program provides veterans, first responders, including therapists and family members, to receive trauma work and counseling with grants. Many of these folks would not get these services otherwise due to financial restrictions.”

Programs are individualized depending on the needs of the facility or the individual participants and usually run for five to seven weeks, with the same participants coming out for two hours each week.

These programs have been especially popular.

“I would say that the five- to seven-week programs offer the time and space for participants to connect with each other and the equine herd,” Balowski said.

There are also dual diagnosis groups that come from local treatment centers and participate in sessions that run 90 minutes each week for seven weeks.

The non-profit also provides services to mental health clinics and the V.A. Domiciliary, a long-term residential program located at the Northern Arizona Veterans Administration that focuses on chemical dependency, depression, anxiety, PTSD and life challenges. These programs are funded through the individual businesses.

The two primary programs, Equine Assisted Learning (EAL) and Equine Assisted Psychotherapy (EAP), are both tailored to the needs of individuals and groups but are different.

“Equine Assisted Learning is a non-clinical approach based on developing healthy life skills, which include communication, relationship, integrating back into a civilian world and building confidence,” Balowski explained. “Equine Assisted

Psychotherapy applies a more clinical approach, which may include trauma work. There is a licensed mental health practitioner that co-facilitates.”

Some of the modalities used in sessions derive directly from the gifts of horses, such as working with the nonverbal zones common to horse communities, where horses make good use of their body language to convey the most basic and important messages to each other.

The concepts of pull and push, so noticeable in the horse world, are also examined by session participants who ask themselves, “When do I push? When do I pull? Do I do one more than the other?”

Grace said her husband, Chris Glade, was a treatment coordinator in the VA Domiciliary who told her he saw marked gains with difficult clients while attending equine therapy.

She also commented on the advantages of using horses in therapy.

“The horses provide an opportunity for individuals to explore their trauma in away that often can’t happen sitting in a sterile environment such as an office,” Grace said. “CBT, or talk therapy, doesn’t work with a majority of trauma survivors. It’s difficult to access that part of the brain and the parasympathetic nervous system with talking through the trauma alone. With COVID, the outdoor environment allows people to still seek help with the horses and humans, without having to sit on a computer. What a great thing!”

Balowski said there is documented evidence of the success of Heroes & Horses techniques. “We have tracked anxiety and depression levels before and after sessions for three to four years, and the results have show an average reduction rate for both after a session,” she said.

Balowski said she has never considered her work in Heroes & Horses to be a job. “It’s been a personal healing journey shared with others. I’ve learned more about honesty from the horses than in any other arena of my life.” QCBN