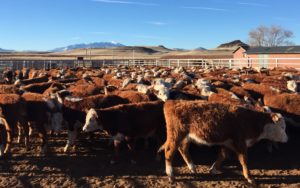 A legacy of land stewardship and conservation included in agreements.

Praising Babbitt Ranches for the way the family business manages its operations and citing the Babbitt family’s long-running reputation for land stewardship and conservation practices, the Coconino County Planning and Zoning Commission unanimously approved a wind and solar project on Babbitt Ranches about 30 miles north of Flagstaff.

He described how the company brought in a real estate developer to show what 40-acre developments would look like across Babbitt Ranches and the value they would bring to the owners, the Babbitt family, over time.

“What was absolutely remarkable, the owners took it to a vote and it was absolutely unanimous not to go that direction,” said Cordasco. “It was a benchmark. What it established was a new mission statement for Babbitt Ranches: Through our efforts of learning and understanding, Babbitt Ranches, a family business and pioneering land company, raises livestock, manages natural resources, promotes science and participates in the broader community in order to join, share and do the very best we know how.”

Cordasco said that decision got the owners talking about a land ethic and created the science, research and educational non-profit arm of the company, the Landsward Foundation. “We started to have discussions and conversations about what a land ethic meant to us. Folks like Aldo Leopold and many others were very instructive in guiding some of that ethic, but it got well-seeded in a family that already had it in them from 1886. It got re-established and well articulated.”

They also discussed how to apply responsibility, obligation and a sense of accountability to their land ethic. “Of course, that included conservation stewardship and, most importantly, relationships,” he said.

The land-ethic focus resulted in the development of The Constitution of Babbitt Ranches, in which the company defined its principles, values and purpose, and Cowboy Essence, a description of character qualities for how the company strives to operate and interact.

Cordasco says that defining moment opened doors for Babbitt Ranches to participate in a number of projects with a wide variety of people and organizations. It also led to one of the largest conservation easements in the country, in which a portion of the Cataract Ranch was donated to the county and The Nature Conservancy to be set aside for open space in perpetuity. Other Babbitt Ranches conservation easements followed for research and wildlife and wildland protection.

Cordasco also discussed Babbitt Ranches’ involvement in the development of the Coconino County Comprehensive Plan in 2003. “It was a really fresh and inspiring time. We were talking about things that had never really been talked about in a comprehensive plan. It really highlighted the things we’re talking about even today – sensitive lands, wildlife and vegetation, ecological health and soils, sustainability, cultural and historical protection. But what was put into that comprehensive plan that absolutely meant the most to me and hopefully to everybody else was at the very beginning of that comprehensive plan was a land ethic and what that meant to the county. What it did was put Babbitt Ranches and our vision of the future straight up the alley with Coconino County.”

Cordasco discussed how Babbitt Ranches purchased and installed an anemometer tower to measure wind speeds at Spiderweb Camp near Gray Mountain in 2005, and also conducted solar power evaluations. “The Babbitts understood that renewable energy was headed in our direction, but they really wanted to learn and understand what it all meant and how it actually fit in with our land ethic and our constitution for our company.”

In 2010, Babbitt Ranches signed two agreements with NextEra to explore two locations – one was the area that has been identified for BREC, the other was further to the west. A decade of environmental studies followed, which revealed a number of golden eagle sites on the ranches and resulted in the creation of the SP Crater Golden Eagle Conservation Complex for the study and protection of the raptors and their habitat.

In working with the U.S. Fish and Wildlife Service and the Arizona Game and Fish Department, Cordasco said golden eagle conservation efforts on Babbitt Ranches will lead to a model that can be applied across the country that calls for no lead shooting, no shooting of prey base and the management of recreation impacts in that area during breeding season.

Meanwhile, the BREC project includes 60 wind turbine sites (up to 54 turbines total), with the tallest to be 384 feet high from the ground to the hub of the blades. When the blade is straight up, it stands at 614 feet. BREC also includes 500 to 800 acres of solar panels, three meteorological towers and a 60-megawatt battery storage system. It is expected to create 250 jobs during construction and four to six full-time management jobs through the project’s 20-to-30-year life.

“The project will have a capacity of up to 161 megawatts of wind energy and 60 megawatts of solar energy, paired with a 60 megawatt, four-hour battery energy storage system,” said NextEra Spokesperson Matt Eissey. “Once operational, BREC has the potential to create good-paying jobs and millions in additional revenue for landowners and the local community.”

Public concerns have included traffic on Highway 180 during the construction phase and impacts on the viewshed. Coconino County Principal Planner Bob Short reported that wind turbines will be visible from two sites – one from the highway and one from a section of the Arizona National Scenic Trail, which runs through Babbitt Ranches, the only stretch that transects private land on the entire 800-mile trail.

“All of the private property in this area is owned by Babbitt Ranches,” said Short. “I also wanted to talk about project noise. The nearest non-participating property is 4.8 miles away so it would not be noticeable to anyone nearby. It might be heard by people walking the Arizona Trail, but otherwise, probably not by anyone else.”

Mechanical engineer and wind energy expert Tom Acker voiced his support. “What I see is a technically sound project. The Babbitt Ranches have not rushed into this project and I think they’ve done a very good job setting it up. They’ve selected NextEra Energy Resources as a partner. NextEra Energy Resources is one of the very best renewable energy development companies in the world.”

“My family has been here a very long time as well [as the Babbitts],” said Commissioner Don Walters, “and I don’t know of a better managed operation than the Babbitt Ranches. I’m in awe of how the Babbitts manage their properties. I’m not a huge fan of a 600-foot tower but I understand the economics of it and I understand what the drought’s done to ranching and how difficult that is. It’s a losing proposition and that’s why I’m in awe of how they’re able to do this. I totally support this project.”

Commissioner John Ruggles echoed Walters’ sentiments and expressed the need to keep Arizona ranches together and functioning. “It’s a part of our heritage. The idea of seeing this kind of property being broken up into 40-acre ranchettes, I don’t want to see that happen. Renewable energy, that’s a direction we have to move in. You just cannot deny this. Look at the other options out there – I have, very thoroughly, in the past. This is the right way to go and the economics have improved dramatically.”

“I will concur with the other comments made by my fellow commissioners about the exemplary and excellent level [of land management] that Babbitt Ranches has done,” said Commission Chair Tammy Ontiveros, noting that she also is part of a long-time Arizona family. “I am familiar with how these ranches have set the standard of…excellence in the care of the land and the conservation of resources.”

Eissey called the commission’s decision to approve the project “exhilarating.” He said NextEra, which also operates Perrin Ranch Wind Energy Center to the west, was excited to be back in the county for a second wind project and to develop the first solar and energy storage projects in the region.

“After 10 years of study, siting and development, we couldn’t have sited a more ecologically suitable project,” said Eissey. “NextEra Energy Resources is appreciative of the Coconino County staff, planners and commissioners for their thorough review and unanimous approval and to all who supported this project, especially the Babbitt family.”

BREC Project Manager Wardah Abbasi said renewable energy is good for the environment and good for the economy. “BREC will help further the state of Arizona’s clean energy goals,” she said. “Wind and solar energy, at the end of the day, is homegrown. It doesn’t get much more homegrown than electricity generated in your own community to benefit your own community.”

“When we visit with the developer [NextEra], our constitution, our principles, our values, our land ethic, our Landsward Foundation goals and objectives, our science, our research, our commitment to the landscape, our commitment to monitoring, our commitment to the long-term health of these grasslands, the wildlife, all of these things are actually put into the agreements,” said Cordasco. “Ultimately, this is a temporary use of the land. There will be a generation or a generation after that that will see these lands like we do today and their opportunities to apply a land ethic and the constitution will be wide open for them. And with all of that, we still get to keep on doing everything we do. There is absolutely nothing that changes on Babbitt Ranches because of this development. Where we are tonight is a terrific example of what we’ve been talking about for so long for private landowners and how to keep open space and how to keep all these things tied together.” QCBN