You are here: Home / Business / Improving Lives in Northern Arizona and Beyond 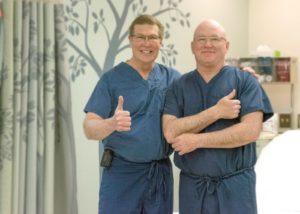 The girl was four years old. She had been riding in the back of a pickup truck when a bale of hay flew out. The wire holding the hay together caught one of the girl’s hands and ripped through four fingers.

Jack Quigley, M.D., and Stephen Lex, M.D., worked to reattach the fingers and put the girl’s hand back together. Both are board certified in plastic and reconstructive surgery and have additional training in hand surgery. The procedure took 12 hours and required using veins from the girl’s toes to reconstruct the blood vessels in her fingers. “Two of the fingers lived,” said Dr. Quigley. “She has a thumb and two fingers. She’s doing well.”

Through their work – performing intricate microvascular reconstruction and reattaching limbs – the surgeons have often found themselves making headlines. “Over the course of about four or five years, we did about five arm re-plantations,” said Dr. Lex. “That was kind of a big deal that required a team approach with orthopedics and general surgeons.”

One patient was an 11-year-old girl whose arm was severed in a truck accident. Another was an Arizona Cardinals football player, also in a car accident. Both surgeries were successful.

For more than 30 years, the plastic surgeons have managed their practice, plus been on call at Flagstaff Medical Center (FMC) for emergency trauma cases that are often the result of recreational activities, barroom brawls or car wrecks.

Together as General Surgeon Residents

The doctors met when they were doing their general surgery residencies together at Case Western Reserve Care System in Ohio, in the early 1980s. Dr. Lex came to Flagstaff in 1989. “I had a wife and three little kids and was taking calls every night,” he said. “Jack arrived about 10 months later. He was the light at the end of the tunnel for me. It was so great to get him here.”

In 1991, they were practicing from the Physician and Surgeons Office Building, which was at the north end of FMC. “We quickly outgrew the 3,000 square feet there and decided we needed a bigger place,” said Lex. “This land became developed here [on North San Francisco St., across from FMC] and we decided to have the surgery center.”

Within the next few years, the young plastic surgeons became land developers and landlords, overseeing the buildout of five medical buildings, including the 11,000-square-foot Plastic Surgeons of Northern Arizona (PSNA) building. On April 1, 1996, PSNA became the first free-standing surgery center in Flagstaff. Instead of having one operating room, the doctors planned for growth and built two. The privacy worked well for patients who wanted to maintain their anonymity, often while undergoing cosmetic surgery procedures such as facelifts and tummy tucks.

The doctors say their mission with PSNA always has been to provide state-of-the-art surgical care to all residents of Northern Arizona. Surgeries range from elective procedures like browlifts and body sculpting, to reconstructive operations after skin and breast cancer, to structural surgeries to correct congenital defects like cleft lip, cleft palate and microtia ear. They also perform endoscopic carpal tunnel and trigger finger release surgery, administer Botox injections, resurface skin and use dermal fillers.

They say it’s a nice variety – about a third hand surgeries, a third reconstruction, and a third cosmetic. “It’s really great for keeping skills up in those areas, along with covering the ER for trauma injuries,” said Quigley.

“I think our congenital patients, those who need multiple procedures for cleft lip and palate or microtia ear reconstruction, are one of the groups of patients that we develop close relationships with,” said Lex. “We see these kids from newborn to 21 years old. We’re operating three to seven surgeries on these kids. They are so appreciative.”

“We see a lot of children,” said Quigley. “A lot of the treatments we do for them makes such a difference in their life. It’s very rewarding to close a palate or lip, or help them with an issue with a hand, like a webbed hand, or too many fingers.”

The practice also has allowed the doctors to participate in medical missions, often with a team of other local physicians and healthcare professionals, sometimes after a natural disaster and usually in less than sterile conditions.

“It gives you that skillset to go to other countries like Brazil, Haiti and Mexico and treat patients there. A good part of it is training the locals to do some of the procedures on their own. When you can go back to a country several times, it’s neat to see patients you treated earlier,” said Quigley.

Operating on a Handshake

The surgeons started their partnership with a handshake. Now, Plastic Surgeons of Northern Arizona operates three offices in Flagstaff and Sedona, including Northern Arizona SurgiCenter and The Hand Center of Northern Arizona. “We didn’t know what the heck we were doing,” said Lex. “It was scary. They don’t teach us a lot about business in medical school and residency.”

“Jack and Steve were pioneers in this regard,” said PSNA Administrator Steve Schwartz, who joined PSNA within a week of its opening. “Their bold and successful venture clearly impacted the way health care has been delivered in Northern Arizona over the past decades, in a very positive way.”

The doctors have enjoyed a steady practice of challenges together outside of the operating room, too. “We started hiking and doing some kayaking,” said Quigley. “Mostly at this point, we do mountain bike trips, a lot of trips over the San Juan mountain area through Silverton Mountain passes. Recently, we’ve been doing Arizona Trail trips. We just finished the Flagstaff to Payson stretch in October. Ironically, we do more talking about the business on those trips than in the office.”

“Even though we share the office, we’re so busy, we hardly get a chance to talk,” said Lex. “So, on the trips to mountain bike rides, we find it’s a good time for prolonged business meetings. It gives us a chance for visioning for the future.”

Good friends before the practice and good friends through the years, the surgeons have raised their families in Flagstaff, fully integrating their busy schedules with active outdoor lifestyles. Both couples, Dr. Lex and his wife, Lisa, and Dr. Quigley and his wife, Janean, have had four children.

Guided By a Mantra

When making business decisions, the doctors say they have been guided by this simple mantra: “Do whatever is best for the patients.”

These days, Lex and Quigley believe what’s best for their current and future patients is to fortify their practice with additional talent. Adam Boettcher, M.D., joined PSNA in 2012. Jeffrey Gibbs, M.D., joined last summer. “They’re going to be the new guard in a few years, but with them taking a lot of the calls, we’re happy to hang around to make a nice transition,” said Lex.

“Both in our surgery center and in our office we’ve been extremely lucky to have excellent and loyal employees who have stayed with us through the years,” said Quigley. QCBN