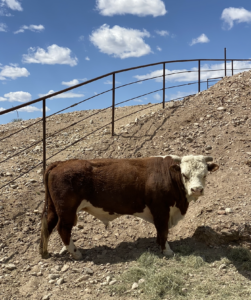 The sanctuary, which is home to 100 domestic and farm animals, never stops saving lives.

Milagro, or Miracle, as he now is known, was rescued by volunteers after being struck in the head and shoulder by a vehicle and bleeding profusely from his ears.

Animal Guardian Network (AGN) founder Carrie Singer jumped into action and rushed the Lake Pleasant-based burro to a veterinary hospital for a diagnosis. Radiographs revealed Milagro had been shot in the head, leaving behind the remainder of a high-caliber hollow-point bullet that was removed. Still wild and unhandled, the brave burro now is recovering from his two life-threatening traumas as he receives life-long care at AGN’s Healing River Ranch.

However, the sanctuary, which is home to 100 domestic and farm animals, never stops saving lives.

Living in the wild for years, Prime Rib, as he was known, lived free and peacefully among the Salt River Wild horses. Captured in a random roundup of unclaimed cattle, he was loaded onto a transport truck headed to auction. A group of determined wild horse advocates created a fundraising effort to successfully outbid all buyers to save Prime Rib, now known as Salty, in the hopes that an experienced and reputable sanctuary would offer him safe refuge. The story of Salty’s plight reached Singer.

“I knew we could help, so AGN offered Salty a safe version of the only life he’s ever known,” she said.

After almost two weeks in quarantine, Salty reached Healing River Ranch and was released onto a 10-acre habitat where he now lives his life alongside wild and domestic horses that have been given the same life-saving refuge.

Milagro’s and Salty’s are two of many touching success stories that have happened at Healing River Ranch, says Singer.

Animal Guardian Network is a one-of-a-kind animal sanctuary situated on 22 acres along the Verde River in Camp Verde. Healing River Ranch serves as a refuge for senior, special needs and hospice farm animals and dogs. For more information, call 602-568-5636 or visit animalguardiannetwork.org. QCBN