You are here: Home / Spotlight / Inspired by Space, Sports, Science 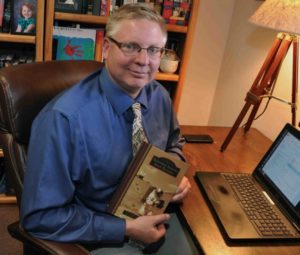 Step into Kevin Schindler’s office and you get a sample of what he loves and where he has been. There is the shark tooth from Florida, the hubcap from one of the tires in Lowell Observatory’s historic Clark Telescope dome and the bucket of baseballs collected from spring training.

The sign above the door says “Stadium Entrance,” so it should be no surprise when guests find themselves engaged in a conversation while tossing a baseball that has been in the hands of major leaguers. Famous guests to the “Stadium” who have found themselves in the position to catch Schindler’s tosses are Arizona balladeer and state historian Marshall Trimble, astronaut John Grunsfeld and author Andy Chaikin, who wrote the bible of manned moon missions, “A Man on the Moon: The Voyages of the Apollo Astronauts.”

Among the walls of books that surround Schindler are five of his own, authored in the last three years. They speak of Lowell Observatory’s past and present science achievements such as the discovery of Pluto and ongoing outer solar system exploration, and Flagstaff scientists’ involvement in the 1969 moon landing effort.

Not surprisingly, these books reflect what motivates and inspires him. Schindler is driven by a passion to learn about and share the stories of great people who pursued their dreams and left their marks on history, and a love for “old things.” As Lowell’s historian, he is also a trivia machine. Did you know the average meteor entering Earth’s atmosphere is traveling a thousand times faster than former Diamondbacks pitcher Randy Johnson can throw a ball?

Schindler’s passion for baseball goes back to his Little League days in Ohio. “Baseball is one of my earliest hobbies. I liked playing center field because you’re in the middle of all the action and you’re always running in one direction or the other.”

Given that description, you could say Schindler is still playing center field, in life. When NASA’s flying observatory, SOFIA, took flight in 2015, Schindler was on board with other science educators to expand scientific literacy. When the New Horizons spacecraft reached Pluto in 2015, Schindler was celebrating in Maryland with the who’s who of the space exploration industry. When his beloved Cleveland Indians clinched the American League pennant in 2016, Schindler was there in the press box capturing the excitement for readers to enjoy. And, when the solar eclipse began casting its chilling shadow across the United States last August, Schindler was in Madras, Oregon, wearing his NASA-approved solar eclipse glasses, marveling at the phenomenon and explaining to anyone interested what exactly was happening in the path of totality.

Schindler’s lifelong fascination with science began as a child. “I collected my first fossil when I was seven. I was picking blackberries in the woods behind my house about 20 miles from Cleveland when I found this cool rock full of what I later found out were brachiopods that lived 320 million years ago. Then I picked up another rock that fit together with the first.”

He was also inspired by his earth science teacher at Buckeye High in Medina, Ohio. “He was the best teacher I ever had.” Schindler applied to his mentor’s alma mater, Marietta College, where he studied geology and specialized in paleontology.

He began his career in the paleontology department at the Florida Museum of Natural History in the late 1980s. A decade later, he moved to Flagstaff and began working at Lowell Observatory, where he has been for 23 years.

Just as his early years of collecting baseball cards and hunting for fossils have morphed into a lifelong passion for sports and science, Schindler loves how things tie together. “My favorite players are the ones who my parents saw, like the legendary Bob Feller, who pitched for the Indians his enitre career. He was a great pitcher, but volunteered to fight in World War II because he felt it was more important to be an American and defend his country than play baseball. There was also Ted Williams, who went off to fight in World War II and the Korean War. He could have hit more home runs, but it didn’t matter. He did what he believed was right for our country. That’s something I really respect.

And how about this, says Schindler: “Cleveland Indians pitcher Gaylord Perry was notorious for throwing a spit ball. His manager was asked if Perry could hit. He responded, ‘There will be a man on the moon before he’ll hit a home run.’ On July 20, 1969, Perry hit a home run, the same day Neil Armstrong walked on the moon.”

Today, Schindler is spearheading a public awareness campaign about Flagstaff’s involvement in the Apollo missions and giving talks about Pluto with the release of his book, Pluto and Lowell Observatory, co-authored by astronomer Will Grundy. “I love to share information and cool stories.”

He also loves to share the baseballs he collects during spring training in the Valley. “I love to give them to kids.” In addition, he leaves them on windshields as souvenirs for fans.

“There are two things I think about a lot these days as I get older that I’d like to impress upon my grandchildren: live positive lives in terms of how you interact with people and your overall outlook; and, leave yourself open to opportunity.”

Schindler’s influence on his five-year-old granddaughter is now mirrored in one of her favorite sayings, “We love nice people!”

What character qualities do you most value?

“Integrity, the passion to follow your dreams, patriotism, and the desire to make the world around us a better place.

“Theodore Roosevelt said, ‘It is not the critic who counts; not the man who points out how the strong man stumbles, or where the doer of deeds could have done them better. The credit belongs to the man who is actually in the arena, whose face is marred by dust and sweat and blood; who strives valiantly; who errs, who comes short again and again, because there is no effort without error and shortcoming; but who does actually strive to do the deeds; who knows great enthusiasms, the great devotions; who spends himself in a worthy cause; who at the best knows in the end the triumph of high achievement, and who at the worst, if he fails, at least fails while daring greatly, so that his place shall never be with those cold and timid souls who neither know victory nor defeat.’”

Where do you love to travel?

“When I was younger, I never imagined going to a foreign country, because the USA has so much great stuff. As an adult, I love traveling around the world. If there’s an excuse to go somewhere, I’ll go there! I also enjoy being at our cabin, north of Mancos, Colorado. It’s about 45 minutes away from Internet service and surrounded by snow in the winter, so it’s a great place to go to recharge the batteries with family and work on writing projects.”

“There’s a place in Florida called Sonny’s that has the best barbecue ribs. Every year, we plan a trip to Florida and I always make it a point to go to Sonny’s. In fact, I’ve even ordered the sauce online. I’m sure the nostalgia of my years there combined with the memory of the food is what makes it such a treat.”

If you had a million dollars to give away, where would it go?

“I would want to give it to places that are meaningful to me: Lowell Observatory, the Museum of Northern Arizona, Marietta College, the Florida Museum of Natural History and Buckeye High School, to start with.”

What’s one of your favorite moments?

“I’ve been fortunate to meet some legendary people — astronauts, athletes, politicians — but these occasions are always more meaningful when they happen with family. I’ve especially enjoyed meeting several astronauts with my wife, Gretchen. When we met Neil Armstrong, she asked for a kiss so she could tell her grandkids that she was kissed by a man who walked on the moon. So, when we met Jim Lovell (Apollo 13 pilot) at a reception, she also asked for a kiss. Later at the punchbowl, she bragged about it to a friend. The comment caught the ear of other women nearby, especially one who looked up and said quite matter-of-factly, ‘Honey, I do that every day.’ It was Jim’s wife.” FBN

Kevin Schindler will be giving his talk, “Arizona Goes to the Moon,” at the Sedona Public Library on Monday, Oct. 8, and at Red Rock State Park on Sunday, Nov. 4.