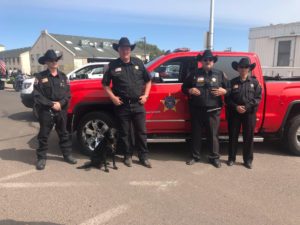 There are 12 rangers in the High Country Ranger Company.

Badged and uniformed in black cowboy hats and boots, Arizona Rangers are present at a great number of public events locally and statewide, often performing duties such as managing the traffic flow at concerts and festivals, connecting military veterans with services and delivering holiday gifts through the Toys for Tots program. This month, for example, the High Country Ranger Company will be helping at the 10th Annual Lance Davidson Memorial High Country StandDown at the Flagstaff Armory from 9 a.m. to 2 p.m., Friday, May 20.

What many may not know is that these rangers are carrying on the unique legacy of an elite legendary team that arrived on the scene when called in to rid the Arizona Territory of bandits, cattle rustlers and gangs of bad guys. They were feared by outlaws and respected by all. Many of the original Arizona Rangers fought alongside Theodore Roosevelt as members of his famous Rough Riders.

And much like their predecessors of the early 1900s, Master Sergeant Dawnna Ybarra of Winslow says today’s rangers continue to answer the call when law enforcement officers need them. They are highly trained, armed and skilled marksmen, who know the Arizona landscape, have a love for community and a passion for public service.

MSgt. Ybarra’s ancestors were roaming the Arizona wildlands at the same time that the rangers got started. She is a fifth generation Arizonan who was born on the Navajo Nation. Her great grandfather, John D. Lee, started Lees Ferry and helped establish trading opportunities between the Navajo tribe and pioneers. She calls it an honor to serve as an Arizona Ranger. Her official volunteer duties with the rangers require eight hours of service a month, but as is the case with most of her colleagues, she trains for hours every week to keep up her skills.

A ranger for three years, she recently practiced drills with the Winslow Police Department. “They really do appreciate our services and our assistance, so they like to invest their time in making us better and more of a uniform team with them. They’ve gone over their forensics procedures with us so now we can help them when there’s an investigation that requires help with crowds or searching for evidence. We have taser certification, firearms training, and even the chief of police went through defensive tactics with us.”

Lieutenant Tom Chesterman of Flagstaff is the High Country Ranger’s range master and firearms instructor. He says every ranger is held to the same qualifications and standards as any law enforcement officer.

“The duties I really enjoy the most are what I’ll generally call festivals. This is where we’re providing a very low stress law enforcement presence surrounded by mostly happy people who are glad that we’re there so they can relax and enjoy themselves and feel secure in the environment,” he said. “However, firearms are an important tool for our missions. We hope we never have to use them, but we might. So we have an obligation for proficiency in their use and tactics.”

Lt. Chesterman says he has had a very strong sense of service since childhood. “I think that’s what sets us apart as an organization – service to our community, service to society. When I moved to Arizona, I learned the history and the mission of the Arizona Rangers and I really couldn’t think of a better organization in which to serve. It provides law enforcement support, it provides support to the community and we also have a commitment to support youth organizations as we can.”

The Arizona Rangers operate throughout the state through 22 satellite companies, which are the equivalent of separate posts of the same organization. The companies are known by the geographical areas they cover. Some are mounted units that make public horseback appearances at rodeos and parades. There are 12 rangers in the High Country Ranger Company.

Lt. Chesterman says many rangers have a military background or are retired law enforcement officers who want to continue their service to their communities. Many younger rangers use their volunteer service in the Arizona Rangers as a stepping stone to start law enforcement careers.

The High Country Rangers can be found at many events around Northern Arizona, including the Matthew J. Broehm Memorial StandDown in Williams, Thunder Over Flagstaff at Pulliam Airport, the Flagstaff Star Party in Buffalo Park and the Standin’ on the Corner Festival in Winslow. QCBN

For more from MSgt. Ybarra and Lt. Chesterman, watch Zonie Living at StarWorldwideNetworks.com or contact MSgt. Ybarra at dybarra@azrangers.gov. Information is also available at https://azrangers.gov/companies/.