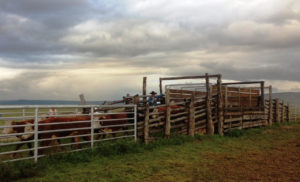 A renewable energy project is being planned by NextEra Energy Resources on the expansive high desert rangeland of Babbitt Ranches and Arizona State Trust Land, about 30 miles north of Flagstaff. The proposed Babbitt Ranch Energy Center is said to be an innovative project that combines wind energy, solar energy and battery energy storage – all in the same location – making more renewable energy available to customers for more hours of the day, even when the sun is not shining and the wind is not blowing.

The project will have a capacity of up to 161 megawatts of wind energy and 60 megawatts of solar energy, paired with a 60-megawatt, four-hour battery energy storage system. The Babbitt Ranch project is expected to create 250 jobs during construction. Once operational, the project has the potential to create good-paying jobs and millions in additional revenue for the local community.

“As Babbitt Ranches honors its 135th anniversary on April 7, we are celebrating a legacy of landscape-scale conservation stewardship, environmental and organizational sustainability, and healthy relationships with the land and the greater community,” said Babbitt Ranches President and General Manager Billy Cordasco. “Along with the Ranch Council and family members, we are creating the foundation now for a future that will create clean, renewable energy generation for the next generation and their children’s children that can co-exist with ranching operations, scientific research, wildlife conservation, dark skies protection and outdoor recreation.”

Representatives say wind speeds have been recorded at approximately 6 meters per second at the site and there is no evidence that noise will interfere with homeowners in the Valle community nine miles away; the closest residence will be five miles from a turbine. NextEra presentation materials state, “Infrasound and low frequency noise from wind turbines are not a health issue.”

Lighting, already being used by NextEra at its Perrin Ranch Wind Energy Center to the west, is designed to turn on at night only when low-flying aircraft are detected. In addition, the project will not be fenced, thereby allowing recreationists such as hunters, campers and hikers access to the land. Visual simulations reveal turbines will be visible from some locations on Highway 180 and State Route 64. Adjustments already have been made to move turbines more than half a mile from the Arizona National Scenic Trail to prevent sound and sight impacts.

SWCA Environmental Consultants say ongoing wildlife studies are underway. Meanwhile, livestock grazing is expected to continue as usual.
NextEra Project Manager Wardah Abbasi says the Babbitt Ranch Energy Center is being planned with sensitivity to environmental and cultural resources. Currently, NextEra is coordinating with the Arizona Department of Transportation and Coconino County on Hwy 180 traffic impacts during the construction phase, from December 2021 to December 2022. Operations are expected to begin in January 2023. Upon decommissioning, NextEra says with recent advancements in technology, now virtually all wind turbine components can be recycled, including turbine blades, and the land will be returned to its natural condition.

Babbitt Ranches holds one of the largest conservation easements in the country, with 40,000 acres, including Cataract Canyon, protected as open space and wildland in perpetuity. The pioneering land company has been instrumental in studying and managing habitat for the benefit of pronghorn. The Babbitts’ Espee Ranch has been the site for the reintroduction of the black-footed ferret that once teetered on the brink of extinction, while tens of thousands of acres of grassland have been restored from encroaching pinon and juniper trees, which helps species like prairie dogs and jackrabbits.

“We are particularly excited about the creation of our SP Crater Golden Eagle Conservation Complex, as there are multiple golden eagle nests northeast of the Peaks,” said Cordasco.

Babbitt Ranches also is measuring the darkness of the night skies stretching across the 750,000-acre ranch and will be seeking an International Dark Sky Reserve designation from the International Dark-Sky Association.

“The Babbitt Ranch project will bring many benefits to Coconino County, including employment opportunities, increased business activity for local businesses and millions of dollars in additional tax revenue to help enhance roads and public services for all residents of this community,” said Abbasi. “We look forward to developing the Babbitt Ranch project and generating low-cost, renewable energy in Arizona for years to come.”