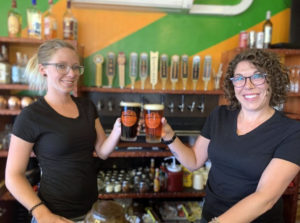 Joany Cole was excited to expand her brewpub business by opening a second location in Prescott.

A week later, the pandemic hit.

Cole and her husband, Brian, had just signed a new lease and taken out a line of credit for a second location on Marina and Sheldon streets in Prescott. Shortly after, they were told they had to close their doors for dine-in service because of the pandemic. The couple own Lonesome Valley Brewing in Prescott Valley, a brewpub they started in 2013.

“Literally a week before, we signed a lease for the second location,” Cole said.

Still, the couple had to figure out how to pay employees and keep a revenue stream going at the Prescott Valley business.

Like hundreds of Yavapai County business owners, Cole applied for funds through the Paycheck Protection Program and the Economic Injury Disaster Loan, both from the U.S. Small Business Administration. The business owner credits the team at the Small Business Development Center at Yavapai College for helping guide them during a time they were in need of financial assistance.

Lonesome Valley Brewing was awarded a Paycheck Protection Program loan in a move that kept all of its employees on the payroll. The loan is meant to help rehire or retain employees of active businesses in the state. The brewpub also stayed in business with support from vendors and carryout orders. Funding from the Economic Injury Disaster Loan has also been approved.

Jeff Herbert, owner of Prescott’s Superstition Meadery, said he had to lay off most of his staff at the start of the pandemic. Herbert and his wife, Jennifer, own a downtown Prescott location and have plans to open a second location in downtown Phoenix.

“It was devastating,” Herbert said. “It was terrible. We went from 30 employees down to 10 in a few days.”

Herbert said he saw revenue from his business drastically shrink without the ability to have a dine-in service for customers. At times, there was only one person on staff at the meadery, and restaurant hours were cut back to six hours a day, he said.

In 2019, the couple was named National Small Business Persons of the Year by the U.S. Small Business Administration. The recognition honors entrepreneurs who take risks on ideas and invest in their communities. Herbert and his wife relied on three small business loans to weather the COVID storm.

The former Phoenix firefighter said he and his staff came up with creative ways to use digital marketing to their advantage. The company offered a 30% discount on anything in its web store, as well as several ongoing promotions on Instagram and Facebook. It also offered discounted gift certificates and next-day delivery. Also offered was a subscription-based mead club, which took off and generated more than 100 new memberships. The club fee starts at $200 every three months, according to the Superstition Meadery website.

“We [found] ways to reach people to get them excited about what we were doing,” Herbert said.

The much-needed injection of $160,000 from the Paycheck Protection Program is “making all the difference” and helped the company hire back most of its staff, he said.

Roxane Nielsen said her eyes and ears were glued to the television to learn more about how she and her husband, John, were going to run the Prescott Brewing Company in the midst of the pandemic. The Prescott Brewing Company started in 1994 at a time when the Bashford Courts building “was completely empty” in downtown Prescott. On March 20, the restaurant closed and the business offered its customers limited carryout service of picnic platters and pulled pork.

“I was reading about what was going on and what people were doing about it,” Nielsen said.

That week, she and staff members sat in an office “for hours and hours” to fill out loan applications. In about 15 days, the company received $400,000 from the Paycheck Protection Program. The funds allowed Nielsen to pay the salary of 70 to 75 employees for eight weeks.

By the time they got the money, Nielsen says all of the hourly staff members were not working. “They were at home.”

Nielsen says she has had to make adjustments with new directives from the Centers for Disease Control and Prevention. Her restaurant has 30% less seating and she has opted to close on Tuesdays and Wednesdays to allow the staff to deep-clean areas of the brewery.

She reminds locals that the brewery has no intention of closing up shop. “Come see us; we are open.”

Cole echoes that statement and says she is optimistic about the future. “We are going to be right where we were or a little bit better.” QCBN