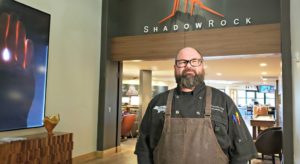 Chef Jason Flores lets his regional roots influence his menu at Shadowrock Tap + Table in Sedona. Perhaps that is why The Smithsonian National Museum of American History chose him to appear at the recent Smithsonian Food History Weekend. One of only six chefs asked to participate in the event’s live cooking demonstrations, Chef Flores discussed his family food traditions and of the importance of wild game in regional American cookery. The theme of the three-day weekend, “Regions Reimagined,” explored the history and changing dynamics of regional food culture in the United States.

The Executive Chef at the Hilton Sedona Resort at Bell Rock joined other notables such as Celebrity Chef Aarón Sánchez of Food Network’s hit series “Chopped” and Chef Sean Sherman whose book, “The Sioux Chef’s Indigenous Kitchen,” was awarded the 2018 James Beard Award for Best American Cookbook. In addition to the chefs, others, including scholars, farmers, food entrepreneurs and writers, gathered at the Smithsonian conference to look at how regional food has redefined and reimagined communities across the nation.

Although Chef Flores now embraces his Oklahoma regional influences, that was not always the case. “I wanted to do just fine dining,” explained the chef, who graduated from Le Cordon Bleu College of Culinary Arts Scottsdale. His decade of professional experience in the hospitality industry is marked by notable roles at iconic resorts such as Hotel Del Coronado, La Quinta Resort and Club, Waldorf Astoria and Arizona Biltmore, a Waldorf Astoria Resort.

“But as I go further along in my career, the way that we cooked [at home] means more to me,” the accomplished chef revealed.

Flores was asked to participate in the previous year’s annual foodie event, but it coincided with his 2017 move to Sedona, so he side-stepped the opportunity. He was contacted again in 2018.

“The Smithsonian National Museum of American History was interested in the way I grew up and what my dad, mom and grandma taught me. I submitted about 15 recipes, some family, some my own or variations of recipes that I’ve seen. They were supposed to choose one recipe, but they chose two: Buttermilk Fried Squirrel and Pimento and Smoked Cheddar Biscuits. I added a third, Wild Boar Chorizo, that I made in-house here [at Shadowrock Tap + Table],” he said.

“I had things coming from all over the country to join me in Washington, D.C.,” said a smiling Chef Flores, who sent the house-made chorizo to himself via an overnight shipping service the day before he left Sedona. Fresh squirrel came from Louisiana.

“The squirrel was wild, harvested by a hunter named Swallow in the bayous of Louisiana. It took him awhile, but he got some,” said the chef, whose dad taught him how to hunt, fish and trap. “I can’t tell you how many times I’ve eaten squirrel. In Granny’s day, squirrel was common,” said the culinary expert.

“The trick is to soak the squirrel in buttermilk overnight. That pulls out the wild game flavors. Then I drench it in flour and pan fry it. I know that this is cliché-ish, but it tastes like chicken. A little like the taste of the dark meat.”

“We had a big Sunday dinner after we all went to church. Granny called it ‘supper’ and it was ready around noon or one o’clock. In the winter, we ate what Granny had put up in jars. In the summer, I helped Granny pick and hoe the garden. I got paid in pickled beets. I still love pickled beets.”

Today, Flores makes pickled vegetables in the kitchen of Hilton Sedona Resort. “I just put up vodka pickles for the bar’s bloody marys, made with 50 percent pickle juice and 50 percent vodka.”

“[At the Smithsonian,] we had people from the South, North and both coasts that represented pockets of cuisine around the country. We talked a lot about the blurring of lines – about how the food is changing.

“Food transcends everything. Can you take Southern ingredients and make it Latino? Sure, you can. How do you take things and twist them? There are things on my menu here that are blended. Smoking is a big deal where I’m from, and my smoked salmon is done very Southern. In the Northwest where we think of salmon originating, they smoke it slowly over alder wood that has a subtle flavor. Mine is smoked over mesquite or hickory, fairly hot and fairly quickly,” he said.

Flores says he loves the flavors of the Southwest and the way that they are done with mesquite. “It mingles well with the Southern style.” The brisket hash on the Hilton’s breakfast menu is a good example of his Southwest-Southern fusion. The brisket is smoked in hickory wood, a Southern favorite and made with ancho chiles, topped with chipotle hollandaise and served with corn tortillas. Flores’s pimento and cheddar biscuits also appear on the breakfast menu. “I’ve been making the biscuit dough since I was a kid. It lends itself to whatever you want to put in it.”

“I’m an Okie, but I live in the desert. [At the conference,] we were talking about the Depression era when the Okies and Arkies went to the West Coast. My great-grandparents were part of that – they went to Bakersfield, California, to pick fruit. After World War II, my grandparents moved back to Oklahoma and started a concrete company.” Flores was born in the Sooner State and it was there that he learned to cook in his Granny’s kitchen.

Flores was clearly honored to be part of the Smithsonian. “I’m just a kid from Oklahoma. You strive for things like this in your career.” QCBN

Chef Jason Flores says he loves the flavors of the Southwest, the way food is cooked with mesquite and how it blends with Southern cooking. The brisket hash on the Sedona Hilton’s breakfast menu is a good example of his Southwest-Southern fusion.