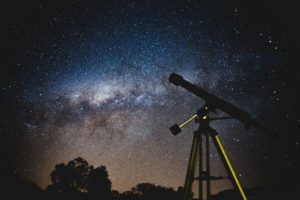 Jupiter and Saturn will appear closer to each other on December 21 than they have in nearly 400 years, and Lowell Observatory will be covering this great conjunction with a free interactive livestream program.

Beginning at 5 p.m. MST/7 p.m. EST on the 21st, Lowell astronomers and educators will share spectacular live views of Jupiter and Saturn through observatory telescopes while discussing the nature of conjunctions. The winter solstice also happens on the 21st and the Lowell team will explain the astronomical connection to the seasons and why they occur.

This livestream event will last about two hours, ending when the two setting planets are no longer visible.

Guests may join the event by visiting the Lowell Observatory YouTube page here.

Once every 20 years, the two largest planets in our solar system—Jupiter and Saturn—appear to meet in Earth’s skies. Such an event is called a great conjunction and the next one occurs this December. The two planets are now drawing closer to one another each night and will reach their nearest approach on the 21st, which also happens to be the night of the winter solstice and the peak of the Ursid meteor shower.

On the 21st, Jupiter and Saturn will look like two bright stars that are almost touching, as seen by the human eye. In binoculars or a wide-field telescope, they will still appear quite close to each other. A telescope under high magnification will reveal the cloud belts of Jupiter and the rings of Saturn, as well as several of their moons, all at the same time—a spectacular sight.

For more information and visuals, see this brief video. For the December 21 livestream event, go here.