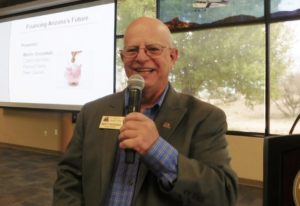 Business representatives, employers, educators, community residents and elected officials present all agree – something serious needs to be done, soon, if Arizona expects to be competitive with the rest of the nation, let alone the global community.

That was the consensus following an intense series of economic, governmental and economic presentations from four Quad Cities leaders on April 4.

Called “Financing Arizona’s Future,” the forum was sponsored by Arizona Town Hall, and attracted community residents from throughout the Quad Cities area. The result was six consensus statements intended to stimulate a government finance system that would create a healthy and prosperous future.

The kick-off speaker was Martin Grossman, Prescott Valley town council member. Now in his second term, Grossman emphasized that he thought the future economic growth and development of the entire area, but particularly rural Arizona, was linked to convincing Arizona legislators that they had to support public infrastructure at all levels.

Following Grossman, George Ruffner from Prescott-based Econ-Plan Associates, cited data that funding for the criminal justice system in Arizona is not properly allocated. He noted that funds that go into the Department of Corrections should instead be used to support programs to provide intervention before incarceration. He quoted a report: “Funding prisons is a crisis management approach to criminal justice that ultimately costs more than would be spent on early intervention such as substance abuse treatment and mental health care.”

Another speaker, Prescott Valley Deputy Town Manager Ryan Judy, was critical of the Arizona legislature’s ongoing introduction of “unfunded mandates” – statutes or regulations that require local or state government to perform actions without any money provided to fund those obligations.

Judy also criticized the way the tax base in Arizona is structured. “Our politics too often are to keep taxes low. You can bring in the same amount of tax revenue if you broaden the tax base. But if you lower the rate, you’re not going to bring in more dollars.”

Even more critical of the way some tax bases are devised was Prescott Valley Town Manager Larry Tarkowski. “We need to change the mindset so that people better understand that if you don’t pay for it, you’re not going to get it. You get what you pay for. If you don’t pay a gasoline tax, the roads are going to go to hell. If you don’t want to increase revenue, the schools are going to be dramatically underfunded.”

Tarkowski emphasized, “The conversation needs to be directed at people running for elected office. They need to be willing to go ahead and pay for critical services.”

Several in the audience agreed with Judy and Tarkowski. Prescott resident Michael Ellegood said the public, especially Millennials, needs to be better educated about how essential services are paid for.

Agreeing with Ellegood was Scott Farnsworth, an administrator at Yavapai College. “We can’t continue to ignore the issues, especially in support for education. These issues of how best to pay for what we need to grow and prosper simply must be addressed.”

Speaker Joel Hiller, executive director of the Yavapai Indian Cultural Center and Museum, said that Arizona leaders need to look carefully at what other states, which have successful and growing economies, are doing. “There’s nothing wrong with finding out why they succeeded and then imitating what they do,” he said.

Embry-Riddle Aeronautical University, which provided space for the community meeting, was represented by Chancellor Frank Ayers. He told the crowd that the university was collaborating with the broader community to develop and support a business and economic incubator – an organization designed to accelerate the growth and success of entrepreneurial companies through providing physical space, capital, coaching, and network connections.

“We need to bring in new industries to the area,” said Ayers. “We need to create well-paying jobs and keep our young people in the area.”

Those present, through open discussion and back-and-forth deliberation, developed six key recommendations that will be forwarded to community, county and state leaders.

Summarized in writing by Arizona Town Hall President Tara Jackson, those points were:

A complete summary of the full report, Financing Arizona’s Future, is available online at aztownhHall.org or by calling 602-252-9600 to request a printed copy. QCBN