You are here: Home / Community Profile / Making Music in His Corner of the World 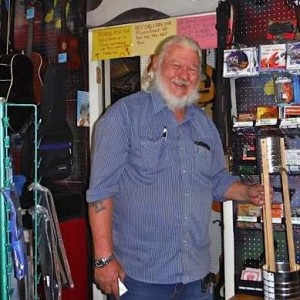 It may seem as though John’s Corner Music Shop is new.

It’s been around for at least eight years, but it moved few years ago and it is a little hard to find. If a person is looking for a brick and mortar music shop on a corner of a street, it won’t be found. The business is inside the Back Street Indoor Flea Market on Second Street.

“It looks new. It seems new, but we’ve been here for a long time. It has been remodeled here recently,” said its owner, John Hale.

Hale first opened his store in 2008 at the Indoor Swap Meet in Prescott Valley.

“I sold a lot of stuff, including instruments. It was called John’s Corner. In 2010, we moved to the location where we are now, “he said.

Here, he claimed a corner inside the Back Street Indoor Flea Market on Second Street.

“I still have the original location and use it for storage,” he said.

On first glance, Hale’s shop looks like an average music store. But a closer look reveals Hale, a self-proclaimed eBay junkie, makes musical instruments out of other people’s junk.

He offers all sorts of odd-looking contraptions made into musical instruments. 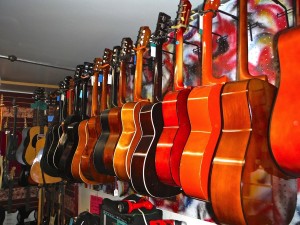 “Originals from the old south, people used to make instruments of boxes and boards,

whatever they had,” he said.

The store also sells everything a musician needs.

In his shop, one will see various guitars, mandolins and banjos. There is also a wall of string instruments, speakers, effects pedals, keyboards, drums, violins and ukuleles – all in various sizes.

The shop also sells supplies needed by musicians such as strings, reeds and the likes.

“We sell everything except for pianos,” he said. “If it is something I have that I had not had before [as a trade-in], like a glockenspiel, we offer it to the public as well.”

Previously, Hale had a forensic lab for 40 years, where he did forensic document analysis for law enforcement until 2012.

“This is my retirement hobby – I’d rather work with musicians than lawyers, but some of the lawyers are my friends and customers,” he said.

It was a lifelong desire to learn to play the guitar, but he is left-handed and it proved too difficult.

So, Hale gets a lot of pleasure from helping kids.

“I will tell you this,” said Lee Power. “He is a major supporter of the Prescott Opry. He was one of our first sponsors. He paid for the banner that hangs on the marquee at the Elks Theater in Prescott. He has donated a couple of guitars for a raffle. For us, he has been a good guy.”

Power is president of the opry’s parent organization, the Greater Arizona Country and Western and Swing Music Association.

“John Hale is a genuinely soft spoken, sincere and kind man who is more than generous,” said Jennifer Ward of the Elks Theater. “In conjunction with The Prescott Opry, John gifted my children each a guitar and lessons, in order to ensure that they were able to play an instrument, whether for fun or to share with the community. John has gifted employees who are also willing to help in any way possible. For anyone looking for a music store or lessons, I would certainly recommend John and his staff.”

He has the most fun just making “stuff” out of junk – someone else’s trash – and then provide it to people for nothing.

And from time to time, “real, live musicians come in.”

He says that the store is a gathering place for an inviting people to come in, sit and play and try new genres and instruments.

His friend and helper, Chris Buskirk, a songwriter and working musician, volunteers at the store.

The store is at 7359 Second Street in Prescott Valley. QCBN