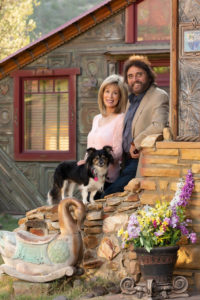 Folks living in or wandering through Northern Arizona who want a break from the fast pace of daily life have a unique opportunity with a one-of-a-kind Bed and Breakfast in Prescott known as Foxbriar.

Husband and wife owners Sandy Moss and Mike Shepard have literally made time stand still with the ambiance and antique clocks that adorn the space – none are wound or set. “This is our signal to guests to slow down, to savor life – in a setting not of this time or this place,” they say.

That description is apt. Walls are not straight, floors creak, room décor is straight out of consignment, antique, second-hand shops, thrift stores and, in some cases, junk piles. In fact, they rescued an abandoned 1900 upright piano from an alley where it weathered for several weeks. They hauled it to Foxbriar and Shepard later refinished it, including the application of gild detailing on the piano’s front.

Another remnant from the past is a 1914 tube-type radio, displayed near the front entrance. It still works, receiving signals from a local AM radio station. The stained-glass front door was rescued from a dumpster at a Prescott school.

Today, the popular rental is listed on the web as a three-bedroom, two-bathroom, fully-equipped house. It is rarely vacant.

Foxbriar now has running water, electricity and indoor plumbing and meets all city and county codes, but don’t expect television. Shepard, the concierge, makes it clear: “When you step into Foxbriar, the intent is that you leave the contemporary world behind and enter a world where you can relax and let your imagination create the entertainment and quietude of decades ago.”

“Foxbriar is totally unique,” added Moss. “There is no place like it in Arizona – or anywhere else.”

More than 100 years ago, the home was a primitive rock, log and cement cabin tucked into the eastern shoulder of the prominent Prescott landmark Thumb Butte. Now, it is a popular destination that appeals to guests from around the world.

One recent guest was an NFL linebacker (and his family) who prefers to remain anonymous. When Shepard stopped by to ask if he needed anything, he sat outside in a wicker chair looking at the rustic landscape and responded, “Everything I want – including absolute peace and quiet – is right here in this magic setting.”

An online review by Vanessa S. said, “So much love and thoughtfulness have been put into every intricate detail.  It’s almost magical, like a fairytale.”

One set of guests liked it so well they extended their stay for six weeks.

Moss describes how she and Shepard bought the original cabin in 2014 for a price they don’t want to disclose – but thousands of dollars below the current property appraisal. “We spent hundreds of hours tearing out rock and cement slabs, replacing old single-pane windows, and jackhammering a portion of an outside rock wall to open the master bedroom to a totally reconstructed but antique bathroom. Putting infrastructure in – electricity, water and gas lines – was especially difficult, because we had to tear out rock and cement and totally replace interior surfaces.”

Shepard, 68, is a native of Prescott. After attending school and then working for various firms in the city, including the Salvation Army and, later, Prescott Unified School District, he says he is enjoying retirement and serving as the concierge/host for Foxbriar. Through the years, he developed a reputation as a talented guitar player-singer and performs with several local musical groups.

Moss, a St. George, Utah native, came to Prescott as a newspaper reporter. She remained in journalism as a radio host and, later, anchor for television programs at a local Prescott TV station until her retirement a few months ago. In 2012, she published “A Terrible Loyalty,” a book describing her husband’s 1992 two-month adventure on a 20-foot boat with a friend crossing the Pacific Ocean from Southern California to Hilo, Hawaii.

What we find appealing about the hospitality industry:

Sandy:  I love our guests as commodities to collect. No two are alike.

Mike: I like providing our guests with a unique and memorable place to stay and relax.

Sandy:  Fall. I love the color of trees as they say goodbye before their winter naps. I relish the smell of wood smoke and crisp apples just off the tree.

What I would do with a blank check:

Mike: I’d create a trust account for people in this community who have aspirations and hope to help others improve their lives.

The best advice I’ve ever received:

Sandy:  My high school history teacher, also the football coach, gave me advice that has guided me through life. He said if we had a difficult decision, think of the worst thing that could happen if we chose what we really wanted. If we did, he said to be prepared to live with it.

Mike:  Don’t ever let anyone tell you to ignore your imagination. Imagination is what makes us alive, warm and human.

How we combine our styles and work together:

Sandy:  Mike is incredibly patient. He’s dedicated to taking whatever time is needed to make something fit. That counterbalances my ‘Let’s do it now and move on to something else’ attitude.

Mike:  Sandy’s creativity and enthusiasm give me the energy to spend long hours on sometimes tedious tasks. Even if we’re not perfectly in sync, the results are always rewarding. Let’s just say we don’t always have the same timesheet to get things done. QCBN