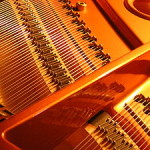 “Thank you for entertaining us with amazing notes of joy.”

That was the hand-written comment of a fourth grader from American Heritage Academy, Cottonwood, after he heard a “Music Memory” concert last March.

Why did he—and dozens of other youngsters write such praise for a concert?

Because of collective efforts of the Yavapai Symphony Guild and the Prescott POPS Symphony Orchestra.

The two groups collaborate to produce what is being called “…the state’s largest classical music concert,” the 2014 Music Memory  Program and Concert will fill Tim’s Toyota Center with more than just the sound of music.

The same two groups also cooperated in recent years to provide students and student musicians from throughout the county with more than $100,000 of student scholarships and support for many school music programs.    (More information below.)

But back to the concert.

As director Paul Manz expressed it, “Students will hear music from traditional classical through contemporary compositions.”

Manz has degrees in music from Northern Arizona University and just recently retired as a music teacher at a Prescott mid-school.

Manz emphasized that the students will not be walking into the concert unprepared for what they will hear.

Weeks before the concert, students are taught by volunteer mentors organized by the Yavapai Symphony Guild.  YSG “Music Memory” co-chairs Anne Solt and Vicky Cook work with musicians, graphic designers and copy writers to prepare a 16-page instructional workbook.  It then is distributed countywide to elementary students.

Heavily illustrated, the booklet contains historical information about the music and the composers, photos of various musical instruments, and scores for the main music themes and explanations of what instruments will be used, Solt explained.  Completing the booklet are “Word Search” puzzles which contain words associated with music.

Teachers and mentors use the workbooks to prepare students for the concert, Solt said.

Solt, who has been involved with YSG for many years, said before they created their own workbooks, they utilized materials prepared by the Phoenix Symphony Guild.  The Music Memory program is in its 38th year.  From 1977 to 2004, Phoenix Symphony musicians visited classrooms in Prescott to provide musical experiences.

In 2005, the YSG decided it “…wanted to be in charge of our own program, so we worked with Roy Breiling, orchestra director at Yavapai College, until we affiliated with the Prescott POPS,” Solt said.

Carol Friedman, a 10-year member, is in her seventh year as YSG president.  In 2008, the YSA decided to expand the Music Memory program into an hour-long concert and make it truly countywide.  The only venue large enough to accommodate that large an audience was Tim’s Toyota Center, a multipurpose arena in Prescott Valley that can accommodate up to 6,200 for concerts.

Friedman said, “For years, our membership and some other volunteers have traveled throughout the county to mentor and provide information.  We also raise the funds to support the Music Memory program—about $2,200 for the workbooks, $650 to cover POPS’ musician expenses, and about $2,500 to Tim’s Toyota Center.  That helps pay for setting up chairs, building a stage, and installing a high quality sound and lighting system.”

Friedman thanked local police and fire departments for “volunteering to provide security at entrances and exits.”

POPS director Manz said of the YSG, “The leaders and members of the Yavapai Symphony Guild have done a tremendous job throughout the years of organizing and hosting Music Memory concerts.  During those years before the POPS became involved, concerts were performed by Phoenix Symphony. Later, the YC community orchestra presented concerts.”

“We’re honored that the Prescott POPS symphony can make such a contribution to the county in support of music.  By supporting public school instrumental music, our organizations can impact positively thousands of students.  Our colleague Tara Sholle in Prescott especially deserves credit for instigating this plan for the symphony.”

Perhaps the comments—misspellings and all– of a couple of last year’s concert  students best express the impact the combined efforts of the YSG and the POPS have.

“I learned how to conducked a bande.”  (Liliana-Camp Verde Elementary School).

of Thousands of Dollars from Music Groups

PRESCOTT – Students and schools in Yavapai County have received more than $100,000 in grants and scholarships in just the past five years from two organizations whose primary missions are providing quality musical experiences for their audiences.

By putting money directly in the hands of qualified students and schools.

For dozens of years, the YSG has given thousands of dollars to students in two divisions—Junior—grades 6-9; and Senior—grades 10-12.

Carol Friedman, YSG president, said scholarships are given in four categories:  voice, string, piano and brass/woodwinds.  In its annual competitions, student musicians perform and are evaluated by judges who come from throughout the state.

In the past four years, first, second and third place recipients in the various categories have collectively received more than $40,000 in scholarships.  Worth noting is that some scholarships go to students who enroll in music programs at colleges and universities, Friedman said.

The other organization, the POPS Symphony orchestra, has given away almost $64,000 in grants and scholarships in the past five years.

Shelley Fields, a six-year member of the POPS board of directors, has for five years coordinated the Scholarship and Awards Committee.

“You just can’t imagine what fun it is to stand on stage and give thousands of dollars away,” Fields said.

She explained “Grants go to two groups—qualified intermediate and secondary schools in the Quad City area; and qualified eighth grade students who intend to pursue music in high school.”

The past five years, 27 school grants amounting to $55,163 have helped schools and instructors improve their music programs.

Seven students, too, have received more than $2,150 cumulative in scholarships.

Jim Howard is a former Prescott Unified School district superintendent who served the past several years as president of the POPS board of directors.   He praised county-wide audiences and communities for their generous contributions and support of not just the POPS but also other music advocacy organizations.

“The generosity of businesses, organizations and people in Yavapai County makes all these activities for the benefit of students and listeners possible.  We are genuinely grateful.”