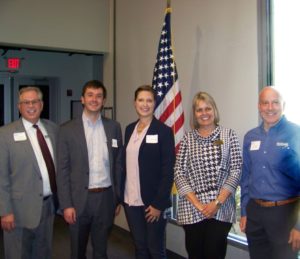 He noted that the U.S. economy is bouncing back from one of the worst years since the Great Depression and the potential for growth was one “of the best in nearly 40 years.”

Despite increasing mortgage interest rates, the worst inflation the nation has experienced in 40 years and a falling stock market, a senior analyst and technical market strategist for LPL Financial Investment says, “Don’t panic. The U.S. economy still remains the strongest around the world.”

Scott Brown, based at the LPL office in Charlotte, North Carolina, delivered this message to dozens of business and financial professionals in Prescott. Using the theme, “From Hand-up to Hand-off,” Brown said the market is especially volatile and likely will remain that way through the year.

Brown was invited by the Prescott Chamber of Commerce in conjunction with One AZ Credit Union to speak at the annual spring Economic Forecast 2022 program on May 3 on the Yavapai College Prescott campus.

He emphasized that caution rather than panic should govern stock market decisions. He noted that the U.S. economy is bouncing back from one of the worst years since the Great Depression and the potential for growth was one “of the best in nearly 40 years.”

During a detailed presentation, he defined several major issues for investors:

“We do know this. We recognized early in the year that 2022 would not be as strong as 2021. The continually increasing higher interests rates will lower bond rates and purchases. Bonds have had two bad years in a row. Changes in the past several months have been abnormal,” Brown said.

He was positive about the U.S. corporate scene. He emphasized that overall, corporate America was quite strong, and that 77% of companies were meeting or exceeding their 2022 estimates. In fact, he saw three positives in the immediate future, items that could keep the market stable. He noted that the COVID-19 impact was now taking a backseat in the United States.

“Globally, Europe and Japan were hit especially hard during the pandemic. But as COVID cases fall internationally, those countries are now ripe for better economic growth in 2022. We do have to watch China, though. It may disappoint us in its growth because of the extreme regulatory crackdown on populations, hence, production, in major cities.”

He predicted the war in Ukraine would not likely have too severe an impact on the U.S. market, and that the majority of investors are really quite “bearish” at this time – not acting aggressively.

He speculated that the upcoming midterm state and Congressional elections will have an ultimate impact on which way stock markets drift for the balance of 2022 and later, 2023.  “Midterm election years are always volatile.”

Brown had a few suggestions about investing during the next several months. Specifically, he said stocks were preferable over bonds, especially U.S. stocks. Brown thought it critical that stock market purchases be “versatile, and not focused on the top 10 or 12 stocks in the market, such as Apple, Amazon, Facebook, Tesla and Google.” He said cyclical factors, such as supply chain improvement, will drive stocks upward. Additionally, if the economy accelerates because of demand for more bank loans, that may reduce interest rate sensitivity.

Responding to several questions from the audience, he recommended being cautious in investing in real estate, especially when mortgage rates were changing so radically. He said too many unpredictable factors, such as a limited labor market, the chronic bottleneck in building and construction supplies, and increasing oil and gas prices, were affecting residential and commercial construction.

Brown reiterated that prices for vehicles were at an all-time high, especially since automotive industries domestically and internationally were not manufacturing enough cars to meet consumer demand.

In conclusion, Brown said an unknown is the impact of inflation and how long it will last. He said the move by the Federal Reserve to increase the benchmark short-term interest rate by half a percentage point was perhaps just the first of several pending rate hikes. “All these moves are in a bid to tame inflation,” he said.