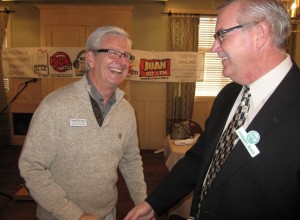 The call to action in Prescott Valley’s battle cry as “Leader of the Pack” originated with Mike Paredes, executive director of the Prescott Valley Economic Development Foundation (PVEDF).

Parades, an Arizona native who has been on the job in Prescott Valley for nearly two years, says that his job – and that of everyone in the meeting room – involves telling the story of Prescott Valley and all that the community offers.

PVEDF, he said, “is excited and well prepared for 2016 with an excellent plan, a proactive plan, a plan that will allow us to tell our story to the external markets outside Prescott Valley, Arizona and the U.S. It’s important for everyone in this room to tell the local story, how great it is to live here and work here and create a family here.”

Event sponsor and Arizona’s Hometown Radio Group Owner Sanford Cohen labeled the economy “about as confusing as it can be right now” with slow growth, significant unemployment, low interest rates, low inflation, high stock market, high government debt and uncertainty in China. He characterized the business climate as “decent” with “no recession, but no boom either” amidst another potential interest rate hike and the new federal administration.

Marnie Uhl, president and CEO of the Prescott Valley Chamber of Commerce, praised teamwork and identified the Chamber’s successes last year. Uhl, who this month celebrates 10 years leading the Chamber, said that the community provided “the best Valley of Lights we have had in many years.” More than 900 cars passed through on four of the open nights, including 950 on Christmas Eve. Arizona Highways television covered that event and others in the area.

“It’s a gift that our community can do that together,” she said of the Valley of Lights, while also highlighting the importance of events such as a job fair hosted with Goodwill Industries and Yavapai College. She also touted regional collaboration with the Prescott Chamber, the Chino Valley Chamber, PVEDF, GPREP and other public private partnerships.

The Chamber’s efforts included direct mail to 1,018 new residents and 2,194 guests walking through the visitor center from “all over,” Uhl emphasized. “The West Coast. East Coast. Minnesota…That’s a lot for a community that is on the way to where everybody is going. I cannot say enough about our volunteers. They are making everyone feel welcome.”

The teamwork urged by Uhl and Paredes segued easily into comments from Richard Heath, executive director of the Greater Prescott Regional Economic Partnership (GPREP). Heath, who relocated from Wisconsin in June, noted that many people in the room had roles in the GPREP startup.

Strengthening the town, from Skoog’s perspective, involves expanding Neighborhood Watch and other community safety services to become even better at protecting citizens. Additionally, he said, aging high traffic roads will be repaired.

Paredes’s focus on employment creation includes higher paying jobs, reaching out to businesses dissatisfied elsewhere, and tapping the international market in manufacturing. PVEDF’s tool kit for 2016 boasts a new promotional brochure, website enhancements and translation into Spanish and Mandarin, an email campaign to businesses across the country, and global trade missions within the western U.S. and overseas.

“With a higher cost of living, our neighbors to the west find it harder to do anything,” Parades said, describing monthly trips to multiple areas of California to target companies with 15 to 45 employees in light manufacturing, aerospace and construction. “This is our niche. I found that out really quickly. We need to be knocking on their doors once again and being proactive in that approach.”

A new focus on Business Retention and Expansion is underway by GPREP to ensure consistent visits to local businesses to uncover their needs. Since most jobs are created by existing businesses, the goal is to help them stay and expand, he said. Workforce training through Yavapai College, the Career and Technical Education Center and Mountain Institute Joint Technical Education District support this effort.

Paredes said he aims to make PVEDF “a catalyst to help local companies expand and increase the community’s economic vitality.” The “eyes and ears” role of site selection groups and other global partners “puts us in front of corporate decision-makers who need to hear the local story.”