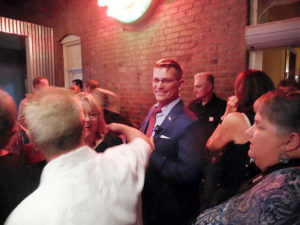 Incumbent Mayor Greg Mengarelli won an uncontested second term as mayor of Prescott during the primary election Aug. 27. Mengarelli received 10,093 votes – almost double the 5,048 needed for a majority. There were 377 write-in votes for mayor.

Speaking almost immediately after the election results were announced, Mengarelli said he felt privileged to have led the city for the past four years. “I appreciate all those who voted for me, and I pledge to dedicate my efforts to doing what is best for the benefit of the entire community in coming years.”

Mengarelli, 52, has been a Prescott resident since 1995. He earlier had served on the Prescott Unified School District School Board, but resigned to avoid conflicts with his elected city position. He and his wife, Sheila, have nine children and one grandchild.

City Council Positions Not All Filled

The race among four candidates for the three Prescott City Council positions did not conclude as clearly as that for the mayoral position. Four candidates were running for four-year terms. Three positions were open.

The other candidates – incumbents Jim Lamerson and Steve Sischka – did not receive enough votes to be elected, so they will face off in a Nov. 5 run-off election.

Lamerson has been a council member for four prior terms. Sischka was completing his first term.

Data released by Lauren Custis, the Yavapai County Registrar of Voters, showed that slightly more than one half the eligible voters – 15,958 (52.37%) cast ballots in the city election. Registration numbers show that 30,469 people are eligible to vote. QCBN