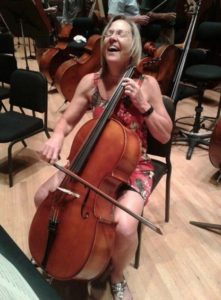 Managing a rewarding career is as much how a person approaches living as what transpires during business hours. That reality was poignantly reinforced in 2018 for Flagstaff’s Melissa Collins Cripps, agent/owner of Melissa Cripps Insurance Agency, Inc.

“My life changed last year when both my parents died within 12 days of each other,” Cripps said. “My mother died of leukemia and my father died of a broken heart 12 days later.”

Characterizing her “world as a very different place now,” Cripps relishes blessings that have enriched her life and given new meaning to goals and relationships. Every day, she takes to heart her mother’s last words: to avoid judging others.

“I have received many blessings, not the least of which is a closer relationship with my older sister,” Cripps explained. “I have a different perspective on what is important. I don’t have room in my heart for hate or jealousy or resentment.”

For Cripps, the most rewarding aspects of her career always have been interacting with people and forging ahead with an impact. Her solid work ethic and desire to help people led to opening her own State Farm Insurance Agency Sept. 1, 1989. During this, the agency’s 30th year of operation, she mused about how her life all came together.

In 1968, at age 10, Cripps moved with her family to Flagstaff. She later relocated to Tempe to attend Arizona State University (ASU). Working for a family friend, she managed an insurance agency for a consumer lending service. She quickly learned the business, grew to appreciate the industry, and obtained her state insurance license.

“I had never been in insurance before and had majored in music at university,” she said. “I liked solving problems and fitting the pieces together. It was very hard work in the beginning. I wondered at times if I was going to make it. Now, I look back on 30 years, which seem to have gone by very quickly.”

Deciding after four years that she wanted to make money for herself rather than an employer, Cripps contacted major insurance companies about how to start her own agency. She chose to join State Farm because she appreciated the company and its contract for agents.

“However, they would not appoint me as an agent until I had my college degree,” she explained, noting that she had fewer than 20 credit hours remaining. “I was in Tempe at the time and wanted to get back to Flagstaff, so I wrote 22 letters to agencies in Flagstaff to get a job while I finished my degree at Northern Arizona University in night classes.”

State Farm Agent Bill Trent hired her for the two years until graduation and the State Farm approval to open her own agency.

“I have worthwhile work where I can help people in so many different ways, not just through selling products, but by helping [clients] plan for the unexpected,” she explained. “I love working with people and helping them.”

Cripps attributes her business success to a strong focus on “doing a good job, doing the right thing and developing relationships, not only with clients and potential clients, but also with members of the community.”

Some of that civic involvement indeed is music to others’ ears. Cripps began playing cello at age 12, ultimately participating in regional and state festivals and attending music camp at NAU. After leaving music for a while after high school, she successfully auditioned for the Flagstaff Symphony and played there for 20 years.

“Ten years ago, my husband and I, along with some brave souls, started Orchestra Northern Arizona,” she recalled, adding that her husband, David Cripps, is the artistic director and conductor. “This orchestra is comprised of mostly amateur players who love playing and have no other opportunities. Our tenth anniversary concert and celebration is in May.”

That same month, she will complete her Masters of Music in Cello Performance at NAU, where she has studied with Mary Ann Ramos, Doctor of Musical Arts (DMA). “I started this journey after being inspired by attending the Baltimore Symphony Academy in 2014. The culmination of that academy was to play side-by-side with the professional musicians of the Baltimore Symphony.”

No matter the situation, Cripps has composed her own path to success, filling life’s pages with notes high and low. Her son, Robert Collins, attends ASU and works at Gateway Community College. As a wife, mother, daughter, businesswoman, mentor and musician, Cripps has authored the sheet music for achieving her goals.

“I was the first woman [insurance] agent in Flagstaff, and in fact, one of a very few throughout our region,” she said about her initial foray into the industry. “It was challenging to find my voice and stand in my strength, and to be accepted as professional and knowledgeable.”

She built her business early on by networking through volunteerism. “I simply said ‘yes’ every time someone invited me to be on a committee or board of directors.” When she jumped back into volunteering several years after becoming a mother, she “made a conscious decision to only participate in organizations that fit my mission and passion.”

Cripps since has served on the Flagstaff Arts Council for six years, including two years as president, and regularly contributes to Girls on the Run and “just about anything to do with young people’s development.” A KNAU sponsor, she also is a major contributor to the arts through the Arboretum, Dark Skies, the Viola Awards and Orchestra Northern Arizona.

“My mission is helping to empower women, young and old, and my passion is the arts,” she explained, adding that she’s compiling a long list of “when I graduate” volunteer opportunities, including more involvement in Orchestra Northern Arizona.

This year, she again plans to sponsor Movies on the Square and will host a refreshment table at the American Cancer Society Climb the Mountain to Conquer Cancer on Aug. 17.

Having been honored with the Athena Award for leadership from the Greater Flagstaff Chamber of Commerce in 1995 and the Flagstaff Arts Council’s Viola Award in 2017, Cripps encourages others navigating the world of life and business to “just do the best job you can.”

She said, “Don’t try to find shortcuts or easy streets. It takes a lot less effort to simply do your job well and with integrity. Never measure success by the amount of money made or the size of the business. Success is knowing you did your best.” QCBN

Music has been a life-long love for State Farm agent Melissa Cripps.