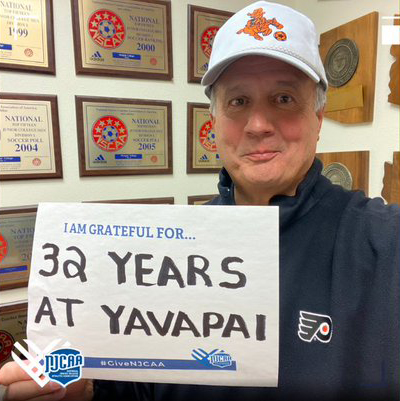 Pantalione was hired in 1988 by then YC Athletic Director Lynn Merritt. He was at the University of Montana, where he earned his degree. Prior to that, Pantalione had been coaching and directing soccer programs in England and then the University of Wisconsin-Green Bay, Kenyon College in Ohio, Jesuit High School in Portland, and Archbishop Wood High School in Philadelphia. In all, he has been active in soccer for 40 years.n icon in the Quad Cities and even more so in the collegiate soccer world, Mike Pantalione retired in mid-January after a 32-year career as head soccer coach at Yavapai College (YC).

No men’s soccer coach in the nation has a record that even comes close to Pantalione’s .900 winning percentage. He is the only coach in intercollegiate soccer to average more than 20 wins a season.

Those who know Pantalione will tell you he is a quiet, humble man, reluctant to take credit for any Roughrider accomplishment. That was apparent when Pantalione, in an exclusive interview with QCBN, said, “It’s a player’s sport. All the credit should go to the players for the program’s success.”

However, the Philadelphia, Pennsylvania native’s individual honors are too numerous to be put aside. Among them:

2015—Received NSCAA Letter of Commendation for unusual achievements that exceeded performance requirements, expectations and contributions to junior college athletics and soccer in the United States.

2016—Awarded the prestigious Bill Jeffrey Award in recognition of long-term service and contributions to collegiate soccer.

2016—Only active coach in men’s sports to be selected for the Arizona Community College Athletic Conference Hall of Fame. Pantalione also is a member of the National Italian American Sports Hall of Fame.

But, larger than Pantalione’s personal honors are those of the teams he and assistant coach Hugh Bell coached through the three decades they worked at YC. Those include seven national NJCAA championships, 78 total championships (conference, regional district and national), 21 national tournament appearances, 19 Final Four national appearances, 28 Arizona Conference titles, and 29 consecutive years of being ranked in the weekly Top 10 National Soccer Polls.

More than 350 of his players moved on to soccer scholarships at major colleges and universities, and dozens played with national teams, Major League Soccer teams and World Cup teams.

Expressing Gratitude to the Coach

Following the announcement of Pantalione’ s retirement, tributes poured in from all over the nation. Former student athletes, fellow coaches, parents and fans let him know of their affection.

Pantalione says he has been contacted by hundreds of former student athletes, many of whom have gone into professional or semi-professional soccer careers, and others into coaching and teaching.

“Coach Pantalione had a legendary career guiding the Roughriders to unparalleled success both on and off the field,” YC President Lisa Rhine said of Pantalione’s years of contributions. “We are proud and honored to celebrate all the achievements he accomplished in the coaching community. We wish him nothing but the best in retirement.”

YC Athletic Director Brad Clifford echoed Rhine. “Words cannot express what Mike has meant to Roughrider athletics. Mike is a true professional in every sense of the word. Mike is a Hall of Fame coach who is well-respected across the world for his soccer knowledge that has made Yavapai College synonymous with soccer.”

The college is sponsoring a public event at 2 p.m., Saturday, March 27, when the recently completed practice soccer field is scheduled to be dedicated as the Michael Pantalione Field. Immediately following the dedication ceremony, the celebration will continue in the YC Community Room, where the new head soccer coach and the new women’s soccer coach will be introduced. Guests need to RSVP in advance via the YC Events pages if they plan to attend.

Pantalione is reported to have recruited soccer players to Yavapai College by telling them that “Yavapai” is a Native American word that means “winning soccer.”

Plans for retirement include:

I am remaining in Prescott. This has been our family’s favorite place. It is home.

Let us be grateful to people who make us happy. They are the ones who make our souls blossom.

Special people in my life include:

Dedicated student athletes. They’re the ones who scored more than 3,000 goals. I didn’t.

I credit my success to:

Yavapai College. Special acknowledgement is due for allowing me to guide, direct and support every one of my student-athletes during my tenure.

The dates most special to me are: