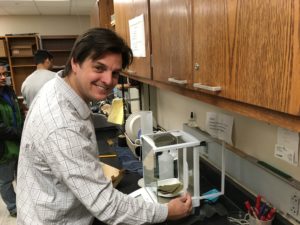 Smoke rises from picturesque rolling hills on Panama’s Azuero Peninsula. Cows, goats, chickens and horses move about cleared pastures. From a Los Santos mountain vista, Ruth Metzel of Pro Eco Azuero points out different land uses – a teak plantation, large burns and pastures, and pockets of dry tropical forest. “This is the area we hope to reforest and connect in the upcoming years.”

Intense pressure to create open pastures for agriculture and cattle ranching is contributing to deforestation. More than a million acres have been degraded in Panama. Add in a warming climate and ecologists fear species of monkeys and birds are at risk of extinction on Panama’s Azuero Peninsula, where only 8% of the forest still remains. However, a growing effort to restore the forest is mounting, including support from Northern Arizona University researchers and students from the School of Forestry.

“We suffer no illusions that this entire peninsula is going to turn back into forest,” said Metzel. “But we do feel that it’s important to conserve some strategic patches of forest along waterways, connecting the existing forests so that we can really help species that are in critical danger of extinction like the Azuero spider monkey subspecies, the Azuero howler monkey and the Azuero parakeet.”

Pro Eco Azuero is striving to create a 75-mile wildlife corridor, where animals can move about the area. In the rural community of Pedasi, a small tree nursery is being cultivated to help with replanting efforts.

Thousands of miles away, NAU Forestry Professor Kevin Grady and his students are working to identify the most resilient tropical dry forest trees for reforestation efforts. “We’re looking for those that can survive drought, support other plants and animals, store carbon, regenerate nutrients and sustain the local economy.”

In a School of Forestry lab, Grady and other researchers grind up leaves from thousands of samples to analyze their chemical components. They are also studying fungi from the forest to understand how the ecosystem works together. The Terminalia amazonica tree, for example, grows fast in nutrient-depleted soil. Scientists do not know why it does so well, but suspect microorganisms play a role by delivering important elements like nitrogen and phosphorous to the roots.

“We’re hoping to greatly accelerate our reforestation with the experiences and knowledge that NAU has to offer,” said Metzel.

Back in Panama where landowners have used fire to clear vegetation for generations, a growing number of ranchers believe rangeland and forest can coexist. Twenty-six-year-old Yarelis Baista is one of them. Translated by Metzel, Baista says she is concerned about the animals and the ecosystem. “She is planting trees, especially in the watershed area, right near the streams and water sources to restore those areas,” said Metzel.

Near towns like Boquete, the buzz of chainsaws can be heard from roadside shops as local furniture makers craft tangled branches into chairs and tables. Forest restoration efforts aim to help maintain a sustainable resource for artisans who rely on wood and other forest products for their livelihood and sustain the region’s vibrant culture.

Meanwhile, Pro Eco Azuero collaborates with teachers, as well, to enhance environmental education in the classroom. To expand on what they are learning, Grady says the NAU School of Forestry is working to create an Eco Kids network in Panama and elsewhere. “Students will learn what it means to be good land stewards. They will also have the opportunity to share their findings and experiences with kids in other places, like Flagstaff.”

As Panamanian children play a game like musical chairs involving characters like Jorge, a smiling monkey on a poster, real Azuero howler monkeys can be heard from the schoolyard, barking out territorial warnings from isolated and diminishing swaths of the tropical dry forest. QCBN