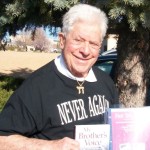 “Economic, personal, educational, family and religious freedoms – most people don’t really know how lucky they are to have them – until they don’t.”

That theme – appreciating human values and rights that most take for granted—characterized the seven school presentations that Holocaust survivor Stephen Nasser made during a whirlwind four days of speaking in Yavapai County in mid-March.

Nasser was visiting Yavapai County (and also Maricopa County) to speak as a prelude to the observation nationally of the annual Days of Remembrance in April. That period was established by Congress in order to commemorate the Holocaust and as a permanent memorial to its victims.

Nasser’s presentations ranged from schools in Prescott and Prescott Valley to Dewey, and from Cottonwood to Oak Creek. He was heard collectively by an estimated 1,600 students, teachers and parents. He illustrated his comments with graphic, sometimes horrifying images in his PowerPoint presentation.

This year marks the 11th that Nasser, who lives with his wife, Francois, in Las Vegas, Nev., has visited the Quad Cities area to speak to schools and organizations.

Liberated from Nazis by Americans

Nasser, now 83, told each of his audiences that it was 69 years ago this month – April 30, 1945, “…when I was liberated from the Muhldorf death camp by the U.S. troops, commanded by Gen. George Patton.

“Most of your parents, probably some of your grandparents, weren’t even born when more than 6,000,000 Jews were executed by the Nazis. But I remember, and that’s why I want to tell you my story.”

Only 13 at the time, Nasser was among 21 members of his Jewish family captured by the Nazis in Budapest, Hungary. They were taken by railroad boxcar to the notorious Auschwitz concentration camp operated by the German Nazis as part of what they called “the Final Solution.”

Some of his family members were later transferred to another camp at Muhldorf, located in the Bavarian area of Germany. He is the sole survivor from his family.

His story is now in print. Nasser wrote My Brother’s Voice to detail how he survived.

“The Nazis were able to control me physically but not mentally,” he said.

Nasser describes how he and his 17-year-old brother Andres, along with other prisoners in late autumn 1944, were assigned to a brutal work detail to clear forestland for a railroad. When they stumbled back to their barracks, hungry, worn out, one of the Waffen SS guards screamed at them that one of the prisoners was missing. Nasser said the guards selected him and two other prisoners and beat them with whips, demanding that they tell where the prisoner was. The missing prisoner had committed suicide.

Nasser said he passed out from the pain. His brother carried him back to his bunk.  Nasser said his brother told him, “You must be brave and strong. Don’t let the Nazis defeat your mind.”

“My brother, whom I loved as much as life, continually inspired me. And even as he grew weaker from beatings and starvation, he made me promise I would not surrender my mind and soul to the Nazis,” Nasser said.

His brother continued to lose weight and grow weaker. Andris was sent to what was called “Sick Bay,” but what Nasser said was in reality the death house.

“I crept in there one evening. I found my starving brother stretched out on a filthy bunk. He recognized me and said, ‘Promise me you will not give up.’ He shut his eyes – and died in my arms. I was 14, but I vowed I would get out of that hellhole and keep the memory of my brother and family alive for as long as I could.”

Nasser dedicated his book to his brother. “I personally lost more than half my body weight in that camp. I only weighed 78 pounds when I was liberated eight months later. But I never forgot my promise to my brother, so I did all I could to keep my promise to Andris.”

Nasser says it frightens him that too many of us take our freedoms in America for granted. “I can’t emphasize enough how you students need to take advantage of the opportunities you have for education and preparation for your careers,” he told students. “But you must be willing to fight for what is right.”

“Be good citizens,” he continued. “Care for each other and your community. And look at the logo on my shirt – ‘Never Again.’ Society must never again let something like the Holocaust occur. It is up to people like you to prevent it and protect our freedoms.”

In addition to his book, Nasser recently wrote, in collaboration with Anntane Raskin, a two-act play, Not Yet, Pista. “Pista” is Nasser’s Hungarian given name. The script dramatizes for stage presentation how Nasser survived the horrifying concentration camp experiences.

Nasser has traveled the world sharing his message. His latest presentation in Prescott Valley was number 865. He estimates that he has presented to almost 200,000 people and has no idea how many have seen him on television in various nations. QCBN

To can learn more about Nasser, visit the website www.mybrothersvoice.com.