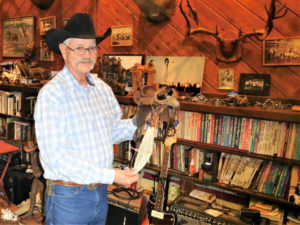 One of America’s most renowned Western artists, Bill Nebeker, was selected to create a bronze sculpture as a memorial to officers who have lost their lives in service of citizens of Yavapai County.

Nebeker’s selection was announced by the Yavapai Law Enforcement Memorial Committee (YLEMC), chaired by Sheriff Scott Mascher. Nebeker, a lifelong resident of Prescott, said he was humbled and honored beyond his ability to express.

Recognized as one of the nation’s most prominent sculptors of cowboys and horses, Nebeker has been president four times of the prestigious Cowboy Artists of America.

Nebeker was not always famous. He and his wife, Merry, scratched out a modest living in the 1960s and early ‘70s, working at a foundry in Skull Valley created by the late Western artist, George Phippen.

It was not until 1974, when he sculpted a small statue of legendary Western actor John Wayne, that he achieved more than regional recognition. He fashioned the sculpture after an image he had of Wayne from the award-winning movie “The Searchers.” Wayne heard about it, contacted Nebeker and invited him to meet him in Stanfield, a small town near Casa Grande, where Wayne owned a ranch. The Nebekers drove down in their pickup truck.

“We sat on the tailgate and talked to Wayne,” said Nebeker. “He ended up buying a couple of my bronzes. Before long, a lot of Hollywood people knew about me.” His works started selling.

Nebeker credits Merry, his wife of 55 years, with being his main supporter and cheerleader during the lean years when he struggled to make a professional career of Western art. Now, his works are showcased in major museums throughout the United States. Private collectors also have his work. Several European galleries and museums display his art.

On Aug. 9, Nebeker’s largest sculpture ever, “If Horses Could Talk,” was mounted on a roundabout at Deep Well Ranch and Crystal Lane on SR 89 going north out of Prescott. The artwork shows a cowboy peering through binoculars to find a deer while his horse is looking downward under a rock ledge where a buck has hidden.

His newest sculpture, “Lest We Forget,” will memorialize the estimated 18 Yavapai County law officers who have died in the line of duty since the founding of Arizona Territory.

The memorial features an officer of the 1880s-1900 territorial era portrayed in Western style – a gun belt and holster with historic depictions of a pistol and bullets, wearing old-fashioned trousers tucked into high-topped leather boots. Hat in hand, he’ll look down in honor toward an empty pair of boots signifying fallen officers.

The life-size statue will be mounted on a granite boulder approximately three feet by four feet wide and deep. A smaller boulder in front will be inscribed with names of fallen officers and display a pair of empty old-time boots with spurs on them.

When finished, the sculpture will be located on the Courthouse Plaza in a triangular-shaped raised area near the corner of Montezuma and Gurley Streets. It will be highly visible to thousands of residents and visitors who explore Arizona’s first territorial capital and seat of government.

Nebeker spoke about the memorial’s significance to him. “Several lifelong friends and Prescott High School classmates have been policemen, sheriffs, DPS officers and U.S. marshals. In fact, several of their children now are serving our community, county and state. To create something to honor law enforcement officers is a great opportunity. To have it on the Courthouse Plaza in the town where I grew up and near the famous Bucky O’Neill statue is beyond my wildest dreams.”

Prescott Chief of Police Debora Black commented about the choice of Nebeker to create the memorial: “A memorial dedicated to honor law enforcement officers who have made the ultimate sacrifice will be a fitting addition to our already beautiful County Courthouse Square. It will allow everyone to pay homage to our fallen heroes. Bill Nebeker grew up in our Prescott tradition. His work embodies the legacy of our Western heritage. I can’t think of anyone better suited to create a memorial reflecting the valuable role peace officers play in our community.”

“This statue at the Courthouse Plaza will remind us all that freedom and peace [are] not free,” said Yavapai County Board of Supervisors Chair Craig Brown.

Nebeker said he hopes to have the memorial completed by January. It currently is being cast by the Prescott Valley foundry Bronzesmith.

No taxpayer dollars are being spent to construct the memorial, YLEMC committee members said. Instead, a fundraising campaign fund has been established for those who wish to contribute.

Best advice I ever received:

Be honest. A man’s word is his bond.

Favorite celebrity to hang out with:

John Wayne, but he’s gone. Now, probably Sam Elliott, with that gravelly deep voice that fits so many of his Western movie characters.

No doubt about that. A couple of eggs, over medium, easy, sausage and hashbrowns – every morning of the week.

Big Island, Hawaii, up north where all the cattle ranches are.

Advise for a long, successful marriage:

Lots of hugging and kissing and dancing. And never go to bed at night angry.

Best character quality to pass along to my children: