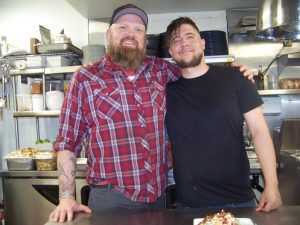 I had the opportunity to create a totally new and different culinary experience for diners and I think we’ve done it. But it was challenging.”

That’s how Tony Burris described accepting the role of executive chef at The Barley Hound last October.  The newly remodeled restaurant, located at 234 South Cortez, is in an eye-catching Victorian-style home with roots dating back to the early 1900s.

Burris said owner Skyler Reeves recently had spent a “substantial amount of money” remodeling both the exterior and interior. “We’ve now got not only a distinct visual appearance, but also a varied, diverse menu that we’ll be changing to fit the seasons of the year,” said Burris.

“Chef Tony has created an exceptional menu that’s reflective of his ingenuity,” said Reeves. “He’s been an integral part of building the restaurant into what it is today. We’re fortunate to have him as the executive chef creating our most elevated dishes.”

The restaurant now is being marketed as a gastropub.

Burris explained, “That’s a coined phrase. It combined gastronomy, a British word that means the art of choosing, preparing and eating food from a given culture, with ‘pub’ – a term associated with popular meeting places for people who want to eat and drink in a very social public place. That’s what we have here: a menu with items to please adventurous eaters, along with some of the more familiar items and craft beers from Arizona. Our cocktails are tailored locally, quite unique. The same is true of our menu. For instance, our oxtail soup or sous vide barbecue prime pork ribs or a Scottish egg are every bit as tasty as a ground chuck cheeseburger and fries.”

Burris and his colleagues routinely change the menu, offering items that fit the time of day and season. One major change too, was the adding of a Sunday brunch to the regular hours. Offered from 10 a.m. to 3 p.m. Sundays, the brunch menu ranges from traditional bacon and eggs to Fried Green Tomato Eggs Benedict and Chorizo and Black Bean Breakfast Tacos.

The staff has increased to meet the many changes. Four people work in the kitchen, two in dishwashing and eight at the front of the restaurant.

“Barley refers to one of the ingredients used to make whiskeys – and we have a great selection of them,” said Burris. “Hound refers to the dog-friendly patio, where we encourage our patrons to bring their pets. In fact, customers can actually order a dog bowl – rice and beef – and we’ll serve their dogs on a frisbee out on the patio.”

Burris was born in Kansas but grew up in Grand Island, Nebraska. He had worked with Reeves earlier in the catering business. “I was excited to move into the remodeled Barley Hound and push people’s boundaries with new culinary experiences,” he said. “I was able to draw upon my experience as a graduate of the Scottsdale Culinary Institute in 2008 and then my professional experience at a very upscale resort in Tucson: Canyon Ranch Resort. While there, I was lucky. I learned all stations of the kitchen in this very exclusive full-service resort. It has every imaginable amenity for guests. I had a chance to experience some exciting and exotic menus. I am bringing those concepts to the Prescott area.”

No stranger to the region, Burris first moved here when he was 21. He attended Prescott College and earned a degree in environmental sciences. “I always remember the friendly, small-town vibe of Prescott and the sense of community that was here. That’s what brought me back.”

Now 44, Burris says his focus at The Barley Hound is to push people’s dining boundaries. “The inspiration behind our new menu is balancing the creative spins of comfort food I grew up with in an approachable experimentation of different flavor profiles that will surprise tastebuds.”

Most Difficult Food to Prepare

Seasoned scallops because they require absolute attention at every step – from preparation to cooking. Being especially attentive to cooking temperature is critical.

I’m paraphrasing Michael Jordan when he said, “Failure is not a reason to create excuses but a reason to find ways to correct mistakes.”

I’ll listen to almost anything, but my real favorites are blues and rock, especially sounds from 20 to 25 years ago when I could understand the words.

Being outside in the natural environment, especially when I have my adorable Australian shepherd Zulu with me. QCBN