You are here: Home / Local News / Opportunities for Students at NAU-Yavapai 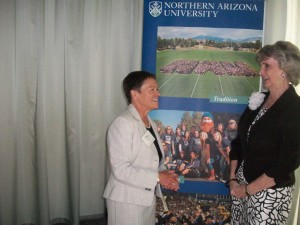 Speaking to a large crowd of community leaders and friends of Northern Arizona University, Rita Hartung Cheng, president of NAU since July 2014, said the university would continue its commitment to providing high quality undergraduate and graduate programs to students attending the NAU-Yavapai campus in Prescott Valley.

Noting that it was her fourth visit to the NAU-Yavapai branch campus, Cheng said, “I want to recognize the faculty and staff of NAU and Yavapai College for their collaborative efforts in making it possible for people of Yavapai County to meet their academic, economic and career goals.”

Cheng spoke before she attended ceremonies on Friday, May 19, to recognize the 26 graduates of the NAU-Yavapai campus. Since its opening only a few years ago, more than 100 students have earned degrees through the NAU-Yavapai branch.

Observing as someone who had arrived from outside, Cheng said, “I see clearly how NAU and the communities throughout the region are intertwined and strengthen one another.

I also see clearly that our resources are greater if we reach out to address issues collectively and not in silos.”

Cheng said that NAU had a commitment to the partnership in Yavapai County. “We are fulfilling a critical role. We are adapting to changing circumstances, not only in how we are funded but also in how we deliver education.”

She cited the innovative, low-cost degree programs offered through NAU-Yavapai as “…growing into a center of educational opportunity for county residents. We will meet the needs of today and the future through our partnerships with you.”

“We have to live within our means, but I envision what we are doing in Yavapai County as becoming a national model in offering worthwhile educational experiences. We will increase research productivity, extend and expand our commitment to the community through volunteerism, community engagement and interactions that benefit not only the university but also the people and communities we serve,” she emphasized.

She also stressed that NAU was committed to helping communities in Yavapai County and surrounding regions in improving employment opportunities and the economy.

Prior to being named the 16th president of NAU, Cheng had served as chancellor at Southern Illinois University in Carbondale, where she also was a professor of accounting. Before that, she had 22 years of teaching and administrative experience at the University of Wisconsin-Milwaukee.

Cheng is internationally recognized for her research and expertise in governmental and non-profit accounting and economic issues. A certified government financial manager, Cheng earned her Ph.D. in management from Temple University’s Fox School of Business and Management. She also has an MBA degree from the University of Rhode Island and a bachelor’s degree in business administration from Bishop’s College in Quebec.

As NAU president, she oversees an operating budget of $500 million and a faculty and staff of some 4,600.

“We serve more than 27,000 students throughout Arizona, including those we enroll at NAU-Yavapai,” she said. She noted that more than 200 undergraduate, graduate and professional degree programs are offered.

She indicated the likelihood of expanded enrollment in NAU-Yavapai programs will undoubtedly bring new programs to the region.

Chancellor Frank Ayers of the Embry-Riddle Aeronautical University-Prescott campus said he looks forward to even stronger relationships with NAU. “We already have a strong partnership through our cooperative Army ROTC program at NAU. We’re eager to expand other programmatic opportunities which will mutually benefit our students,” he said.

Tri City Prep was recently labeled an “A” excelling school by the Arizona Department of Education. It also was cited by U.S. News and World Report as one of the top 50 high schools in the nation.

Larry Tarkowski, town manager of Prescott Valley, said he and Town Council leaders are hopeful that NAU will soon take steps to construct facilities within the community.

“I can assure you that town officials will use their influence and financial clout to help NAU find land and construction of facilities. We want a strong university presence in the region, for we know it will help us grow a skilled workforce, improve the economy and enhance the fiscal strength of our communities,” he said. “It can’t happen soon enough.”

“I’m delighted to learn of these plans for expansion and educational innovation for the entire region. We’ll do all we can to make these opportunities occur as soon as possible.”

Mike Beatty, president of Prescott Investors Services, has long had a relationship with NAU, having earned his bachelor’s degree there in 1977. Beyond that, Beatty served as president for the NAU Foundation and continues on as a board member.

“It is gratifying to me to hear Dr. Cheng talk about these new opportunities. What’s really gratifying is to know that she is listening to the needs of the communities the university serves – and she’s ready to do something in response.” QCBN