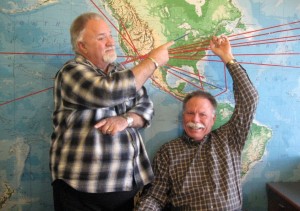 The saying “Home is where the heart is” may well be true. Yet, the roads less traveled – or untraveled all together — tug at many a heartstring like the Italian troubadour plucking his lute.

But Stan the Travel Man’s passion for the business and clients compel him to remain happily working part-time. Plus he knows the industry intimately. As well he might. He’s been at HomeTowne — “the ‘e’ was added for affectation,” he chuckled — for some 20 years.

“It’s an interesting marketplace,” he said of the Prescott region. “There’s a senior and retirees element. And there’s an affluent market that has the money and time to travel.

As long as they have those — health and desire to travel — it’s finding and connecting them to what they want. That’s what we do best. And we’re local.”

Kephart acknowledges the impact of technology and big-box vendors on brick-and-mortar agencies, adding that they were not the predicted death knell. “They’ve a place in the industry. I think most of us prefer to deal with the same person as opposed to calling a big-box store or getting online with nobody and trying to ask a question and not having anybody know who or what you are. What customers are looking for is the best of both worlds. We call ourselves a click-and-brick agency.”

He says travel is dependent on disposable income and vulnerable to economic malaise. When the 2007 housing crash hit, he says HomeTowne survived because of an increase in advertising dollars and broadened product lines in response to market shifts.

“Instead of one big trip a year, people started taking three shorter trips,” while prioritizing affordability and more bang for their buck. “There’s ways to go on cruise ships without going into a room with a balcony. You can go on an inside cabin with no window and spend a lot of time on deck.”

He noted, “We’ve seen desire-based travel develop rather than everybody stampeding somewhere because everyone’s going there. Maybe you’re getting older and want to know where you came from – what we call heritage travel. Or you’re stressed and want to veg on a beach. Or you’re a culinarian and want to experience a food or wine vacation. Also, people are looking at modes of travel. That’s given rise to the incredible boom in river cruising, the long slow methodology of getting on and off every day, and mega-ships that carry 5-to-6,000 people. They’re like a city on the ship – amazing works of art and engineering.”

For the dampening impact of economic earthquakes, one force is potentially deadlier: an act of terrorism.

“We had in the months preceding a very large group on a cruise in the Mediterranean. When 9/11 happened, the cruise line was financially hit so badly because everything just stopped. So many travel agencies went out of business. We had insurance so even though their vacations were dashed, no client lost one penny.

“But the 9/11 disaster scared people,” Kephart added. “Fear is the biggest negative, especially to travel. People are afraid to go, and rightfully so.”

Yet, that can be overcome by lowering the price. “Money trumps fear in many cases. I’ve seen it. Something that was $1,500 is now $700. So a person [who thinks,] ‘Well, I was thinking it might not be so good to go to Paris… buuuuut maybe if I could go for that, I’d go,'” he explained.

Kephart’s travel outlook for 2016 is “excellent.”

“There’s been pent-up demand due to economic conditions, a four to five year back span where people made decisions based solely on their pocketbook and inability to go. That pent-up demand is being pressed from the other side. They’re getting older, their shoulders or knees hurt so they want to do it while they have the wealth now and health now,” he said.

Trans-generational travel will continue to blossom, he thinks. “Also, I think you’re going to see, especially here in Prescott, small groups of locals traveling. They like to meet others. It’s a great way to experience other people of similar likes and maybe have an affinity.”

Stan the Travel Man closes on a characteristically optimistic note: “There’ve been worse times in history. This time doesn’t hold a candle to the Inquisition or Great Plague. We’re really in a good place in many ways and I think people who recognize that are going to do what they can to fulfill their own wish lists.” QCBN