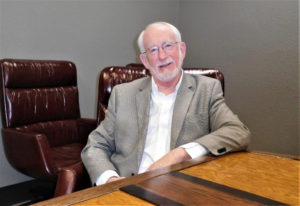 The new executive director of the Prescott Unified School District Education Foundation has national and international experience and credentials that bring him praise across the Quad Cities community.

Paul Kirchgraber recently accepted the head administrative position for the PUSDEF after having headed the Yavapai College Foundation (YCF) for almost 10 years.

“I watched the PUSDEF since its inception six years ago,” he said. “It is a remarkable success story. That small group of passionate volunteers saw a need and created an organization totally dedicated to providing financial support for amazing public school teachers, administrators and their programs.”

During the years since its founding, the PUSDEF has raised approximately $1 million, with those funds being used to support teacher grants, technology, curricular improvements, and teacher and student recognition programs.

Kirchbgraber accepted the position following the retirement of former Executive Director Tami Phillips, who had headed the organization until her January retirement and relocation to Tennessee to be near family. “When that leadership position became available, it fit my timing perfectly,” he said.

Joe Howard, superintendent of the PUSD system, was enthusiastic about having Kirchgraber take the executive director’s position. “I’m thrilled that PUSD and the PUSDEF continue to land some of the best talent in the business for its many different leadership positions. Paul Kirchgraber is as successful and experienced as you could hope for in this kind of foundation work. Worth mentioning is that he is calm, cool and collected. I believe he has found this type of professional calling, because our public schools are in a place where his servant’s heart can make a big difference.”

Equally supportive was Jenna James, president of the PUSDEF. “Now more than ever, it is important to marshal our resources and attract more funds to support our schools, teachers and students,” she said. “Paul brings the fundraising expertise and knowledge of the local philanthropic landscape that we need to continue these efforts. “

Kirchgraber has been involved in fundraising since his 1976 graduation from SUNY-Brockport in his home state of New York. He earned a master’s degree from the University of Louisville in Kentucky in 1980. He immediately began work with an American healthcare project in Saudi America, where he remained until 1984. He then relocated to Los Angles and was recruited by Peter Ueberroth to help identify and train staff to work at 27 different sites for the 1984 Summer Olympics. It was there that he met his future wife, Melinda. They have been married for 32 years.

In 1985, the Kirchgrabers became involved in international efforts again. He worked for the Peace Corps in Somalia on the border of Ethiopia and then worked with several non-governmental organizations (NGOs): Médecins Sans Frontieres, United Nations High Commission for Refugees, Red Crescent Society (equivalent of the Red Cross) and several other healthcare groups.

Upon returning to the United States, Kirchgraber accepted a teaching position in social work at California State Long Beach and, later, the University of Southern California. He soon was recruited to be part of a billion-dollar fundraising campaign. His successes in California attracted the attention of the Arizona State University Foundation, where he served as vice president of advancement. He also was involved in programs for Arizona Special Olympics and the American Red Cross, which gave him opportunities to travel to Prescott and the Quad Cities. In 2010, he learned of the opening at Yavapai College (YC) in Prescott.

“When we started visiting Prescott, my wife and I fell in love with the place,” he said. “We immediately agreed that if the right job came along, we’d move to Prescott.” It did. They did. And they have no regrets.

During his years at YCF, Kirchgraber headed efforts to raise money to support the YC multi-campus system.

He calls the capital campaign to raise $3 million for the Southwest Wine Center in Verde Valley on the Clarkdale campus “the most fun I had at Yavapai College.”

He says most people didn’t know that it was the only academic wine education program in the Southwestern United States. “In just a short time, it has become an award-winning program and one of the college’s most recognized destination programs.”

Kirchgraber stresses that his new position will give him many opportunities to build nurturing relationships in the community, especially now, during the pandemic. “We need to find creative ways to connect during this time of social distancing. We’ll pivot to virtual tools such as online auctions, crowdfunding, peer-to-peer fundraising and live streaming. I have all the confidence we’ll be successful.”

Asked if he had any major disappointments, Kirchgraber reflected a moment and then responded, “Yes. My biggest disappointment is that we didn’t find Prescott sooner.”

Marvel Comic books. They let me have total escapism.

Anything cooked by my wife. She is a fantastic home chef – very eclectic.

Qualities I admire in others:

Someone who is an honest person and who manages with integrity and ethics. They must be flexible and adaptable.

What I’d do with an open checkbook: