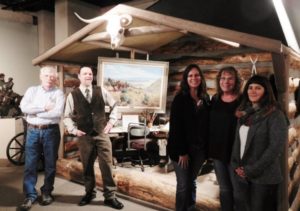 Highlighting its 35th anniversary is a year-long mission for leaders and board members at the Phippen Museum of Western Art.

“In fact, it is far more than a mission. It is a passion,” said Edd Kellerman, the museum’s recently-named executive director.

“Our ever-increasing visibility, coupled with the increasing number of events we host and shows and exhibits we schedule, is bringing hundreds more visitors through our doors every month. The museum has become a popular tourist destination,” said the Prescott native. “That doesn’t include the thousands more who will visit in the Annual Western Art Show and Sale around the Courthouse Square every Memorial Day. The sidewalks and lawns surrounding the iconic Courthouse will be packed.”

Artists from throughout the Southwest will be available to meet attendees at the Western Art Show scheduled for May 25-27.

Meanwhile, museum staff members are already at work mounting the next show called Desert Horizons. Jeannette Holverson, museum curator, said more than 90 pieces, including some created by the most notable historical and modern artists in the Southwest, will be featured at the exhibit opening Saturday, March 2.

“Contrary to what many people think – that Arizona is nothing but parched, barren desert and wasteland – this exhibit will show the magnificent diversity and stunning panoramas we have in the Grand Canyon State,” said Holverson.  She noted dramatic paintings from the world-acclaimed Picerne Collection of Arizona Landmark Art will be featured.

Complementing the art exhibit are several special programs.  Among them are these:

Not every kid has a chance to have a bronze sculpture made from his or her artwork, but “Clay Out West” will offer the opportunity in a Saturday hands-on activity where elementary, middle school and high school students receive professional instruction from award-winning sculptor Neal McEwen. He will teach students how to sculpt clay into a small object. The finished clay models then will be judged. Artists will select winners from each of the three grade levels. Those winning clay pieces will then be converted to bronze sculptures for students to keep as awards.

McEwen also conducts weekend workshops for older people interested in sculpting horses. Details about participating in either of these programs are available from McEwen at 928-778-1385.

Kellerman is forthright in saying that activities and programs have resulted in major attendance increases. He also attributes much of the museum’s increasing appeal to the multi-story facility expansion seven years ago. Functional space increased to 17,000 square feet. That, coupled with improved ease of accessibility to the site at 4701 Hwy 89 on the north edge of Prescott, has visitorship approaching 13,000 people annually.

“Anyone circling the round-about at the entrance can’t help but notice that monumental bronze sculpture, ‘Cowboy in a Storm,’ that George Phippen inspired,” Kellerman said.

Phippen is the museum’s namesake. The first president of the Cowboy Artists of America, Phippen who then lived in Skull Valley, produced more than 3,000 pieces. The museum, inspired by Phippen, is now also the home for the Arizona Rancher and Cowboy Hall of Fame. QCBN