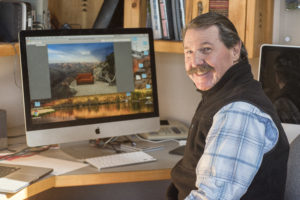 It is always fun when you know someone who “knows someone,” and PJ Connolly has known and worked for a lot of famous someones in Flagstaff and the Four Corners region. That is because it is the nature of the entertainment industry and his business, Locations Southwest and Production Services (LSW).

Whether it is a commercial for Ford Motor Company, a feature film like “Guardians of the Galaxy,” or special projects like Will Smith celebrating his 50th birthday by bungee jumping out of a helicopter over the Grand Canyon, Connolly is Northern Arizona’s liaison for location scouting, production management and film equipment rental.

“A part of what we do is help with logistics, planning, procuring permits and line production – making sure a film project runs smoothly and under budget,” said Connolly, who has been a location scout for 20 years. “Some projects require setting up an infrastructure such as building a road for big film crews then returning the land to its natural state.”

Connolly said, “You can always find a pretty place to photograph or film, but the question is, can you get permission to bring in a crew of 300 or more? We help with logistics, planning procuring permits and line production, even lodging, supplies, extra crew, traffic control and more.”

Sometimes, Connolly will spend a whole year scouting for a project. He also has one of the largest collections of Southwest location images in the world.

With a strong background in filming in rural remote locations, LSW specializes in feature films, commercials, television, print advertising and IMAX. “I wore several hats for the IMAX project,” said Connolly. “In addition to scouting locations along the Colorado River, we cast young Navajo children for the film.”

Connolly has a long history of working with Native American tribes, particularly the Navajo Nation.

“PJ is a location and film expert in Northern Arizona working with some of the largest production companies that film in and around Flagstaff,” said City of Flagstaff Communications Specialist and Film Commissioner Meg Roederer.

Working as a grip (camera assistant) in his early years, Connolly began his career in Phoenix. A few of his memorable projects are “Forrest Gump” – one of his all-time favorite movies, several mini-series with Richard Chamberlain, “Into the Wild,” and “Natural Born Killers” with Woody Harrelson. “Woody was very pleasant and fun to work with,” he said.

Connolly was also a river guide on and off for 15 years. He speaks fondly of a project that he claims was his favorite. “We were filming a live television program for a public broadcasting station out of Japan. I was on a boat on the Colorado River and we relayed our feed to the top of the rim of the Grand Canyon near Desert View to Japan via satellite.”

Gear rental is another part of LSW, from a five-ton grip package to sandbags, film accessories such as silks, flags and filming equipment for smaller projects. “This way, they don’t need to bring all these supplies on a truck or airplane,” explained Connolly.

“Since Flagstaff is the largest city and a regional hub for Northern Arizona, it’s a perfect base for production companies. Filming in Flagstaff provides beautiful and diverse landscapes, panoramic views, a four-season climate and historic areas as well as support services. Film projects highlight our community and contribute to our local economy by utilizing our production resources as well as our accommodations, catering services and much more,” said Roederer. “And PJ always provides excellent service and advice.”

What’s the best advice you’ve ever received and from whom?

“My mom, and it was related to stressing out and taking on more than I can handle. She was a good Christian lady and she would say, ‘Yoke up with the Lord.’ Turn it over. You can’t control everything.”

When was the last time you danced?

“It was at my son’s wedding and recently Pickin’ in the Pines Bluegrass Festival.”

What hobby or skill would you like to develop?

“Fly fishing. I was out scouting for a commercial at Lake Powell for a couple days and went down to Lees Ferry for one hour. It was awesome and I got two rainbows [trout].”

Where is your favorite place to vacation?

“Maui, but I love going on river trips in the Grand Canyon, Lees Ferry to fish and going to the Rockies, too.”

Of all the actors you’ve met, who impressed you the most?

“John Tesh. After a project we worked on, he came up to me and gave me a big hug and tucked a couple 100 dollar bills in my pocket and said, ‘Go have some beers on me.’” QCBN 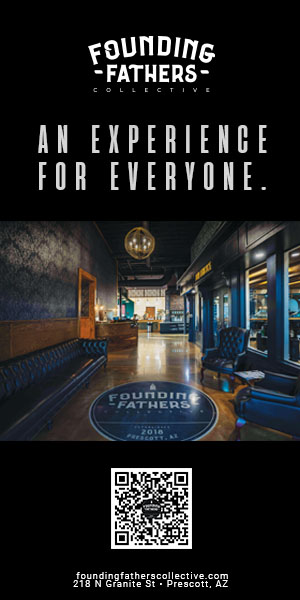