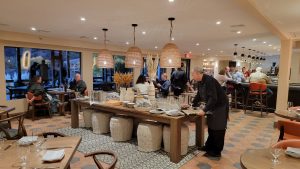 Poco Diablo Resort has opened its new restaurant, Willows Kitchen + Wine Bar, as part of a phased $22 million renovation. Although the restaurant had a soft opening Sept. 15, it recently hosted journalists for a preview tasting of the winter menu and pairings with wines from the restaurant’s extensive collection. The tasting showcased Old World and New World wines along with an Arizona white blend.

The resort, one of the first in Sedona, sits on the historic Chavez homestead. In this same pocket of meadowland, Marguerite Brunswig Staude, who commissioned the famed Chapel of the Holy Cross, lived on Doodlebug Ranch in the 1940s. The one-of-a-kind setting in Sedona’s Red Rock Country makes it an enchanting place to celebrate the winter holidays or any season.

Earlier this year, the resort brought in Chef Evan Campbell to refresh the menu for the redesigned space. Chef Evan promises to keep fan favorites such as the Firecracker Shrimp that delivers a sweet-hot punch with sriracha sauce. Paired as a starter with a Riesling from Alsace, France, the dry honey quality of the wine and crisp minerality mitigate the heat.

But it’s the young chef’s innovation that shines through in the following six courses. “Sedona attracts people who are wellness-minded,” said the chef, who oversees conference and meeting catering. “We get lots of requests for vegan. Some of the favorites we’ve tested on the banquet menu have now made it to the restaurant menu.”

The Zagat award-winning chef sources seasonal ingredients for the higher-end New American cuisine found on the new Willows Kitchen + Wine Bar menu. For instance, the chef brought his penchant for seafood to light with mussels in the brilliant Thai chili coconut soup. The soup’s multi-layered flavoring, so renowned in Thai cooking, was balanced with a pinch of brown sugar. The chef and sommelier paired the spicy soup served in an artisan ceramic bowl with a Sinegal sauvignon blanc from Napa. Sommelier Nikki Stevenson, a native Arizonan, joined the Poco Diablo team after working in California and Nevada.

The team emphasizes a commitment to exemplary customer experiences. “We have several families who have three generations employed here since the ‘70s when Poco Diablo first opened,” said Sales and Marketing Director David Folkeson.

Chef Evan is no stranger to grits. He spent many months in New Orleans, where he cooked in various kitchens to learn the concepts of the unique Cajun and Creole cuisines. As a result, he’ll be bringing shrimp and grits with gumbo gravy to the breakfast menu in the future. “It’s the perfect remedy for a hangover for those who know,” said Lori Tucker, president of the public relations company that represents Poco Diablo Resorts.

The finale of the chef-tasting dinner was a flourless torte with Italian meringue and raspberries. The Amero Montenegro brought out with the dessert not only aided digestion, but also helped extend dinner conversations. QCBN