You are here: Home / Business / Preparing for Animal Evacuations 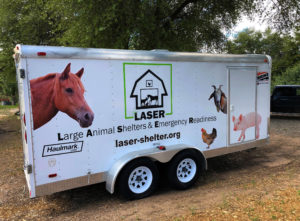 Most humans who are forced to evacuate their homes in times of disaster are overcome with fear, stress and uncertainty.

Evacuation is also frightening for others in the animal kingdom, including household pets, as well as creatures living inside barns and in farm fields.

Until recently, no such formal shelter arrangements existed for these “barn animals” in the Quad Cities area.

That all changed in February 2019 with the incorporation of a new non-profit organization, Large Animal Shelters and Emergency Readiness, or LASER. Its motto is, “In times of crisis, your STABLE solution.”

The non-profit has a two-pronged mission: the coordination of dedicated volunteers, working with the support of the Yavapai County Office of Emergency Management, to provide emergency shelter for barn animals, and to supply information about emergency preparedness to the general public.

When LASER is activated, highly trained volunteers set up one or more shelters at pre-determined locations and care for animals around the clock until the evacuation is lifted.

The need for such care has increased as disasters have grown in size and frequency, timed with the spread of communities, including those with rural animals.

Past experience, according to FEMA data, has shown that many people will not leave without their animals, which can delay evacuation as they prepare animals they may leave behind, or they are forced to turn animals loose, creating chaos and danger to others.

The creation of LASER came after nine major wildfires hit Yavapai County in 1999.

During four of those, a small group of about 10 volunteers, who had previously sheltered household pets, stretched their resources to help evacuated barn animals.

One of those volunteers was Spike Hicks, a founding member and current president of LASER, who is also the liaison with the county and local equine organizations.

“Our first evacuation demand was the Indian fire in 2002, and we set up shelter at Prescott Mile High Middle School,” Hicks recalled. “We sheltered many dogs and cats in crates donated from local businesses and even a goldfish in a jelly jar. We also took in two horses, and I got friends to set up corrals on the football field.”

Years later, the Goodwin fire of 2017 burned more than 25,000 acres in the Prescott National Forest and saw the evacuation of 7,500 people. In addition, more than 200 evacuated barn animals were sheltered in the Fairground Coors Event Center at the old horse track on East State Route 89A.

The Doce fire in June 2013 further focused the need for expanded sheltering services for larger animals.

“Even though we had several years with many evacuations in Yavapai County after the Indian fire, it wasn’t until the Doce fire that threatened Williamson Valley that we had a demand for sheltering barn animals,” Hicks noted. “For the Doce fire, we sheltered small animals at Yavapai College and barn animals at the rodeo grounds.”

Emergency evacuations are hard on both people and their animals, Hicks said. “During the Goodwin fire, we were receiving animals very quickly in large numbers, and county facilities were setting up corrals as fast as we were checking horses in. We also had people showing up with the best of intentions but with varying levels of knowledge and experience.”

Constant observation is critical, Hicks said, and volunteers had to be aware of which animals were friends and which might not get along.

“We checked them often to make sure that their neighbor was not causing a problem. For instance, we took in a mare with a newborn foal and we isolated them. The same is true with stallions that have to be segregated from other horses. And some horses are okay having goats in the next pen and actually seem to like them nearby.”

Hicks said they learned a lot of valuable lessons during those early shelter site events. Among them was the need for more operational structure, which led to the creation of LASER. Now, through LASER, processes have been established to bring animals into a settled environment where they are cared for entirely by trained volunteers.

Each director has specific areas of expertise, such as Harbicht, who handles volunteer training and strategic planning.

She commented on the pre-LASER days: “They took the animals in and took care of the animals; it was reacting to what the urgency was. It highlighted that the need was great, and it was time for a program like LASER to come into existence. There’s nothing else like it in this area.”

In Yavapai County, LASER is a member of Community Organizations Active in Disaster, or COAD, said Heath, who is a retired paralegal. “We’re one of 19 organizations in the Prescott area, all volunteers that come together during disasters to help each other.”

Harbicht also commented that all the board members are “horse people.”

“The equine community in Prescott is such a tight-knit group,” she added. “We all know each other.”

Two shelter sites are ready now to accommodate animals, including the former county fairgrounds on Highway 89A in Prescott Valley and the Prescott Rodeo Grounds.

To supplement the two designated shelters, the Yavapai Humane Society has pledged to provide space at its Equine Center, if LASER can provide animal panels for partitions.

“We’re hoping for donations of horse panels,” Heath said. “We have to be ready for just about anything. We’ve even had peacocks!”

“Luckily, those fires were contained rather quickly,” she said. “We did not receive animals, but we were ready for them. It was like a practice drill.”

Helping in the cause, LASER has an ambassador, “Ferris Muler,” a mini-mule that makes appearance at local events.

Also, a special, well-organized LASER trailer brings supplies to the shelters, such as wheelbarrows, manure forks, rakes, buckets, vests, as well as administration supplies including intake paperwork, cabinets and shelves.

According to an April press release, LASER is modeled after the Los Angeles County Department of Animal Care and Control Equine Response Team (LACDACC-ERT) and has permission to use that department’s basic structure and protocols to create a customized and well-tested program.

Harbicht was affiliated with the L.A. County program for 15 years.

“I ran shelters under that program,” she said. “With their permission, I had all their information – how the shelters are set up, how they are managed, all the operating guidelines, and also the training programs. We had all the paperwork, so we didn’t have to reinvent the wheel. We could start with good foundation materials and customize from there.”

Central to the success of LASER are the volunteers who are prepared to step up and help during evacuations and sheltering.

“All of our volunteer training includes an emphasis on remaining calm in what is a very stressful time,” Hicks said. “The LASER receiving and handling procedures are time-tested and safe for the animal, the animal owner and the LASER volunteers.”

The LASER board has outlined a three-year strategic plan that focuses on key goals. “We’ve set an ambitious target for ourselves,” Harbicht said. “In a perfect world, at the end of fiscal 2022, we will have 150 trained volunteers.”

Some of the training of volunteers can proceed even during pandemic conditions, such as Level 1 training with intake and record-keeping procedures.

“You don’t have to have prior experience with animals,” she said. “We can train volunteers for what they will need for safe animal handling in the shelter environment. And our first level of training can be done remotely. The virus has slowed down our Level 2 training because that one is hands-on, working one-on-one with horses for a full day. We can’t do that yet.”

There are also opportunities for volunteers in areas of fundraising, grant writing and community outreach.

Protocols from COVID-19 are in place for social distancing at shelters and “a lot of disinfecting to create a safe environment for those who volunteer,” she added.

“Fires are going to happen, regardless of the virus,” Harbicht concluded. “We are reassuring our volunteers; if we activate, we will activate within their current qualified training level. Fire season is unpredictable, but honestly if there were a fire tomorrow, we’d be ready to go.”

Another key component of the non-profit’s services, emergency readiness, educates people on how to prepare for emergencies.

“Animal owners need to be prepared for an evacuation,” Hicks said. “They need to make a plan to get their animals out of harm’s way and transported to a shelter. Any plan, no matter how simple, can give them a certain peace of mind. Remaining calm and working through their evacuation plan can also calm their animals. LASER is available to offer information and help for you and your neighborhoods.”

The ultimate goal for LASER is to establish shelter sites throughout Yavapai County, according to the press release, with an eye to setting up a full shelter in Chino Valley this year.

Organizers are seeking grant funds and donations to establish this site and to replicate this strategy at future shelter locations as resources allow.