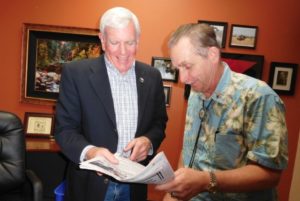 Prescott Mayor Harry Oberg insists that the Prescott Airport is a diamond in the rough that has impact far beyond commercial and general aviation.

Oberg and Prescott mayor pro tem Jim Lamerson say the city is going to give high priority to not just expanding the aviation aspects of the airport but also to the collateral area surrounding the airport.

“We’re confident that as we expand the runway and construct a new terminal, other businesses will be drawn to the site,” said Oberg. “Some will be to serve the aviation public – car rentals, restaurants, lodging – but others may include businesses totally new to the community.”

Oberg emphasizes that any new businesses considering being near the airport will not be water intensive. “What we envision is light industrial commercial enterprises. We already have one that recently came here and built near the airport – Vinyl Visions. We have others who are looking seriously at what we have. Some are from aerospace and others from the medical services industries.”

Vinyl Visions relocated from Southern California and soon will open its 50,000 square-foot facility to manufacture windows and doorways for residential and commercial builders.

Additionally, two residential sub-divisions recently have been approved for development. Both are near the airport. One is Antelope Crossing, a 48-acre sub-division for 255 homes west of SR 89 and south of the Deep Well Ranch Road Roundabout.

The other is Walden Ranch, a 227-acre property that will be platted for 215 lots. It is located just south of SR 89A on the east side of Phippen Museum.

A strong influencing factor on potential growth is SR 89. The highway goes directly from downtown Prescott north to Interstate 40 and is being expanded to a four-lane divided highway as it passes just west of the airport.

“What I’m really pleased about is that the mayors from our Quad Cities communities are involved in the committee that is promoting expansion of the airport and its allied business. We all realize that cooperation, not competition, is the key to economic success for our region. Our airport, in truth, is a regional airport, not just a Prescott airport,” Oberg said.

He says the Federal Aviation Administration (FAA) is interested in seeing the airport expand. “The more regional we are, the more likely we are to have strong economic growth and more jobs.”

Lamerson said one hope is that grant funds will support an environmental assessment study about airport expansion. “If we can move ahead rapidly with that study and get something done in three to four months rather than 12 to 18 months, real progress is eminent. We’re working closely with the Yavapai County officials, the FAA out of Los Angeles and many others to set our priorities.”

Both Oberg and Lamerson agree that the highest priorities in the entire process are public safety and security. Another major priority is maintaining high standards for whatever developments occur.

Two specific physical developments are the expansion of the runway from 7,500 feet to 9,000 feet, and the construction of a new terminal.

The longer runway, Oberg explained, is especially needed for the new Forest Service slurry bombers being used to fight wildfires. Large jet aircraft have been converted to haul the heavy slurry, so they need more runway length to take off, especially during summer months when air density is affected by higher temperatures.

The estimated cost for the runway extension is $15 million.

The Prescott airport is the 35th busiest in the nation, which, along with surrounding businesses, provides about 3,100 jobs. Both Oberg and Lamerson believe that number will grow significantly as the airport expansion attracts new enterprises.

One of the mayor’s goals is to work with Embry-Riddle Aeronautical University in assessing and evaluating ideas that will stimulate economic development. Oberg says he hopes to see something like a business “incubator” evolve.

ERAU chancellor Frank Ayers has said he hopes to help the city develop business ideas, especially those related to aviation and the aerospace industry.

City officials say they will use findings from a scientific survey regarding airline service out of Prescott to improve and expand the airport. The survey, created through the Robertson Safety Institute at ERAU, asks questions about what major airlines are most often used, how often people fly, and what concerns exist for those flying from Prescott Airport or elsewhere.

City leaders say they hope to entice commercial air service to and from Prescott from destinations such as Las Vegas, Los Angeles, Salt Lake City and Denver. QCBN