You are here: Home / Local News / Prescott Cheers for Charlie 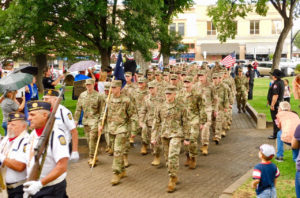 Not all 100 of the citizen soldiers of the Arizona National Guard Unit: “Charlie Company 158th Infantry Battalion” are Prescott residents, but they were welcomed back from Afghanistan like native sons at a recent ceremony.

These members, known as the “Bushmasters,” were honored by the community that turned out in force to thank them for their service on Saturday, Sept. 7, at the Yavapai County Courthouse Plaza.

Just before the ceremony, a lone dark cloud hovered over the city and set loose a deluge.

“It poured and people started running for their cars, but they all came back,” said Melissa Fousek of the mayor’s office who was one of the organizers.

Still, it proved it took more than a little rainstorm to keep hundreds of community members from honoring these young people.

Participants were encouraged to wear red, white and blue for the event, which began with a silent march around the courthouse by the company. Afterward, the soldiers were seated on the steps of the courthouse, where speakers praised them for their service.

Yavapai County Supervisor Craig Brown, a Vietnam veteran, said he and his brothers did not get a proper welcome when they returned from war, but that has changed.

“We want to tell them we love them and that we appreciate what they do for us,” he said before turning to applaud them, which caused the crowd to erupt into applause.

Prescott Mayor Greg Mengarelli, wearing a cowboy hat, reiterated that no matter where they come from, they are now officially Prescott residents.

“Yavapai County is proud to have these brave soldiers as part of our patriotic community,” said Yavapai County Supervisor Rowle Simmons.

The company’s commander Major General Michael McGuire challenged the rest of Arizona and the country to keep up with Charlie Company. “You can’t be asleep at the wheel,” he said.

Fousek said the city recognizes its veterans whenever it can. “Once word started getting out, people wanted to participate, asking what they could do to help. Prescott is a very patriotic city. We have a lot of veterans in the area and the city is very supportive of anything to do with soldiers.”

Charlie Company was founded in September 1865 as Arizona’s first volunteer infantry. It was drafted into federal service in 1917 to help in World War I efforts. The group adopted the name “Bushmasters,” from the venomous jungle pit vipers that members of the 158th Infantry Regiment battled during drills in Central America.

Continuing the city’s patriotic efforts, the Prescott High School Band, after a nationwide competition, was chosen to perform at this year’s remembrance ceremonies of the attack on Pearl Harbor on Dec. 7, in Hawaii. The band is currently trying to raise enough money to make the trip. Those who would like to help are encouraged to call Rebeca Horninan at 919-923-3199. QCBN