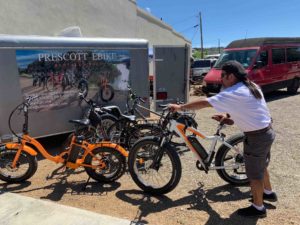 On the heels of visioning and marketing efforts aimed at bringing new life and energy to downtown Prescott, Tony Carcoba has rolled in with his electric bike business with encouragement from city leaders and local businesses.

Tony Carcoba, 43, opened Prescott Ebike Rentals and Tours on July 4, with a Prescott Chamber of Commerce ribbon-cutting ceremony on the lot next to the Chamber office with a silver bike trailer and an orange tarp.

For $25 an hour or $40 for two hours, riders can rent the ebikes from the downtown lot or from nearby hotels like Springhill Suites and Residence Inn. Riders can jump on and tour through historic streets famous for their Victorian houses, like Mount Vernon. “White Spar Road is great for people who want to go into the forest,” said Carcoba. “We’re mostly a mobile business. We’ll bring our bikes to you.”

Prescott Ebike also offers guided tour packages, however, the most popular option is the self-guided two-hour tour for $50 in the scenic areas around town, like Watson Lake with views of the Dells, and popular trails such as the Iron King Trail or the Peavine Trail.

Tours include both road and trail riding, ranging in difficulty from easy to medium and covering varying levels of fitness and expertise.

Prescott Ebike will bring bikes, helmets and bottled water to the designated trailhead, pay for parking fees and transport riders.

So far, Prescott Ebike has a dozen state-of-the-art electric bikes from which to choose, comprised of four different models for different needs, depending on cyclists’ size, age and physical condition.

“The most popular is the fat tire with four-inch tires; a lot of guys love this bike,” Carcoba noted. “We also have a fat tire mini, which is more manageable for the younger and more petite rider. We have two hybrids, both RadCity, a standard or a step-through for easy access.”

“Prescott Ebike Rentals and Tours is a local family-owned business that strives to show visitors and locals alike, the reason Prescott is ‘Everybody’s Home Town,’” said Prescott Chamber of Commerce President and CEO Sheri Heiney. “Their mission is to create unforgettable memories that you will cherish for years to come. They pride themselves in pioneering environmentally and socially responsible tourism by combining fun and awareness that will leave an ecological footprint on our lakes, forests and community.”

Carcoba was born in Mexico City and came to the U.S. as a teenager. He lived in California and then Prescott for 20 years before moving with his wife and two sons to Chino Valley 18 years ago.

His other business is Toro Manufacturing, which creates aerospace components such as spindles, gears, shafts and valves that go on airplanes and dollies that move airplanes. Toro also creates parts for telescopes, jet skis and motorcycles.

Carcoba became interested in electric bikes when he purchased one for his wife.

“She has some physical impediments that make riding a bicycle hard for her,” he said. “With the electric bike, she started riding again. I was getting left behind trying to keep up with her!”

Now, his whole family rides electric bikes. “For me, I don’t have any disabilities, but I can cover three times the distance on an ebike than I could on a regular bike,” Carcoba said. “I can explore more terrain than I can on a regular bike. They’re just a lot of fun.”

Carcoba did his research on demographics, tourism trends and market growth and concluded a year-round online electric bike business would be a good fit for Prescott.

“Options are endless,” said Heiney, “and everyone will be provided with breathtaking tours and exceptional customer care.”

“It’s been a fun and exciting adventure for us, and we hope we can continue to promote alternative ways of transportation and a fun activity to do while visiting, or just as a fun weekend thing to do with your family,” Carcoba said.

A new website is up and running, and brochures, rack cards and banners are spreading the word about the burgeoning ebike enterprise.

Carcoba is grateful for the local support he has received as a member of the Prescott Chamber of Commerce, from the City of Prescott Parks and Recreation department and from local business owners like Margo Christensen, who encouraged him to put banners and bikes at her two hotels. “She is so helpful. The entire small business community has been so welcoming.”

Bikes are available at Springhill Suites and the Residence Inn. “Guests can make a reservation and we will meet them at the lobby and unlock the bikes,” Carcoba explained. “Or, we can pick them up and take them to the trail, and then pick them up and bring them back to the hotel. We’re trying to facilitate the activity so you don’t have to worry about anything.”

Prescott Ebike is also listed in Yelp and TripAdvisor.

Carcoba is also collaborating with the Prescott Pines Christian Camp of Yavapai County to offer bike rides to guests.

“We had 250 women on retreat last weekend and another retreat this weekend,” said Carcoba. “The women loved it; the age range was 18 to early 70s. It’s a great opportunity for us. We’ve been very, very busy.”

Carcoba believes the electric bike soon may be the preferred bike for many. “I think it’s going to be the future. I think the regular bike may be become obsolete, and the ebike might be what you buy your kids.” QCBN