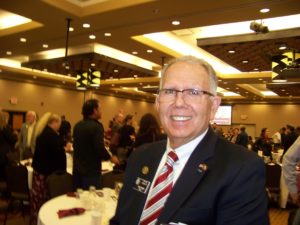 “The State of the City is incredibly strong. Our economic vitality is resilient and diverse. An exciting future is ahead of us.”

Prescott Mayor Phil Goode said economic growth in the greater community seemed “…more than just solid for the coming year” when he shared his State of the City comments with hundreds of local residents.

Goode was the featured speaker during the Prescott Chamber of Commerce annual meeting on March 1 at the Prescott Resort.

The mayor’s remarks followed those of outgoing Chamber Board Chair Danielle Rickets, manager at Sir Speedy, and incoming 2022-23 Board Chair Mackenzie Rodgers, a local APS executive. Rodgers said that despite challenges of the past two years, the chamber had taken the lead, adapted, grown and found new and innovative ways to serve the business community.  She pledged she will continue to support events, networking opportunities, partnerships and collaboration during her term as board chair.

Goode emphasized that city bed taxes are up considerably, which permits rapid reduction of the City’s PSPRS indebtedness. “Taxes are a strong indicator of economic health. We’ve seen a 40% increase over the past year and I am confident that we’ll continue to see strong growth, even with inflation as a factor.”

Goode cited examples of positive growth. One is the construction of a FedEx distribution center on Centerpointe Dr., south of Hwy 89A in northeast Prescott. “That 220,000-square-foot building lets FedEx bring in considerably more ground and air freight to distribute throughout the region. For perspective, that building is about the size of four football fields. More important, they’ll be hiring dozens of employees.”

A second example was the Espire Sports complex, now under construction in what was the Sears Center at Gateway Mall on Hwy 69.

“This multi-sport, fitness and wellness complex with over 100,000 square feet of sports and entertainment features will be unique in Arizona. Not only will it have 13 indoor pickleball courts, it’ll have a full-size basketball court, four golf simulators, a putting green, volleyball and dodgeball courts, and a restaurant.”

Goode concluded, “The State of the City is incredibly strong. Our economic vitality is resilient and diverse. An exciting future is ahead of us.” QCBN