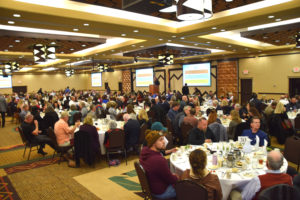 The theme of community unity and cooperation was consistently emphasized during the annual meeting of the Prescott Chamber of Commerce (PCC) in mid-January.

More than 300 people who attended the breakfast meeting at the Prescott Resort heard positive comments about the greater community.

Master of ceremonies Sanford Cohen set the tone by recognizing community and business leaders from throughout the Quad Cities area.

Among those introduced were the executive board and board members for the PCC. Also recognized were the Prescott Area Young Professionals.

Cohen, a past chair of the PCC, discussed Prescott Chamber of Commerce 2019 highlights and accomplishments:

Website referrals were 365,441 during the six-month July-December period, averaging 1,986 referrals a day.

More than 26,000 people were “walk-ins” at the PCC office. Many were international visitors from the United Kingdom, Canada, Europe and Asia.

More than 1,020 walking tours of the downtown were organized by the PCC.

More than 500 Relocation and Visitor packets were distributed.

Cohen then presented incoming PPC Board Chair Jamaal McCoy with a gavel. McCoy, the manager at Findlay Automotive, was introduced while Suzanne Springer, Prescott True Value Hardware, was applauded as past chair. Danielle Rickert of Sir Speedy Printing is the chair-elect.

In brief comments, McCoy honored Harold Viehweg, who for 27 years served as financial director for the PCC until he retired in the fall of 2019. McCoy also praised past board members for their “…dedicated service for the benefit of the entire area.”

Prescott Mayor Greg Mengarelli, now serving his second two-year term, was the featured speaker. He repeated the theme of strong community partnerships by saying Prescott is a beacon of unity and teamwork.

Mengarelli emphasized that Quad Cities businesses and residents set aside differences to work for the social and economic betterment of the entire community. “We align with common goals, and we’re all the better for it.”

Mengarelli noted 2019 achievements in Prescott. He cited paying down the Public Safety Personnel Retirement System (PSRPS) by $30 million. That happened as a result of the passage of Proposition 443, which approved the collection of sales taxes dedicated to paying for the retirement fund.

Mengarelli also noted the groundbreaking for a new passenger terminal at Prescott Regional Airport. He said it would be an economic boon for the region. Commercial passenger travel has grown to more than 73,000 since United Express in partnership with SkyWest Airlines began services in August 2019. When the main runway is extended, even larger commercial jets will arrive and depart. More flights are likely to be added.

Mengarelli talked about construction of the Hilton Garden Hotel at Sheldon and Montezuma, and the adjacent Granite Creek Park corridor. He noted the increase in vendors at the Prescott Gateway Mall. He said discussions were ongoing about the Arizona Eco Development annexation into the Granite Dells, the bringing of Eviation all-electric aircraft manufacturing to Prescott. He reported the city was continuing its leadership efforts to conserve water. He noted that despite population growth, Prescott is using less water annually than it did 10 years ago.

Following Mengarelli’s address, Cohen closed the program by thanking all attending for their enthusiasm and continuing teamwork.

Chamber President and CEO Sheri Heiney urged those present to stay current with Chamber activities by visiting the office at 117 W. Goodwin or by calling 928-445-2000 or emailing chamber@prescott.org. QCBN