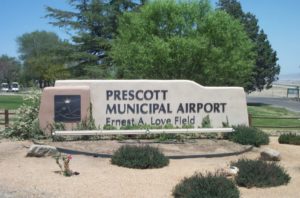 A Prescott City Council member quipped, “It must be something in the air,” when he heard that Prescott Regional Airport (PRA) had been named 2019 Outstanding Airport by the Federal Aviation Administration (FAA).

That honor was given to Prescott for the Western Pacific Region, according to the FAA.

The FAA statement said in part, “This award is granted in recognition of the exemplary work done by the city in proactively completing a Prescott Regional Airport master plan with significant involvement from the community, focus upon enhancing safely of the airport, and accommodating contained growth in commercial air service.”

The award was announced June 7.

Kristi Miller, airport management analyst, told QCBN that United Express routinely has exceeded previous passenger records during the past several months. Airport officials indicate passenger projections will go beyond the estimated 25,000 enplanements for 2019. The commercial carrier has been operating out of Prescott only since Aug. 28, 2018.
To accommodate all the expansion, PRA, also known by its historic title of Ernest A. Love Field, will soon be the site for a new air terminal. Planners and architects are actively involved in the pre-construction phases of an $11.9 million terminal building. Love Field, the name it was given 91 years ago to honor Love, a hometown hero who died in combat in World War I, is currently operating out of a building constructed several decades ago.

How “Busy” is Prescott Regional Airport?

PRA is the fifth busiest airport among the 114 in Arizona. The other four are Phoenix Sky Harbor, Deer Valley, Phoenix Mesa Gateway and Mesa Falcon Field.

PRA is the 44th busiest airport in the United States. It ranks just below Oakland and just above Portland. It has more annual operations than Dallas Love Field, San Diego and Raleigh-Durham.

In 2018, the airport had 235,554 aircraft operations. That includes all takeoffs and landings. That averages 656 daily operations, based on a 30-day month.

A report released through the City of Prescott based on 2018 airport operations and 2019 projects indicates that PRC generates a $160.3 million economic impact on the greater community. QCBN

Full details of the economic impact are available by contacting the Airport Administration at 928-777-1114 or online at flyprescott.com.