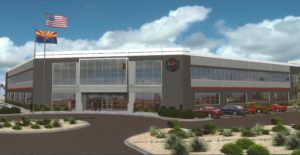 The Prescott City Council has released a portion of the nearly $5.1 million in reimbursements from the federal Coronavirus Aid, Relief and Economic Security (CARES) Act to support business tourism and technology incubation in downtown and North Prescott.

The CARES allocation reimburses the city for COVID-related public safety expenditures during the last fiscal year.

The council unanimously approved four motions to allocate the funds: 1) Approve $60,000 for business tourism and attraction advertising/marketing campaign; 2) Allow staff to seek professional planning proposals for Prescott North and Granite Creek Area; 3) Approve of staff applying for Granite Creek Corridor grant funding up to $438,785.75 for Phase 1; and 4) Approve the allocation of $92,500 for startup and establishment costs for the Center for the Future.

He noted that the Center for the Future had been pulling together resources to further kickstart the center’s business planning and occupancy.

Jon Haass, Ph.D., professor of cyber intelligence and security at Embry-Riddle Aeronautical University (ERAU) and director of the Center for the Future, and Jim Robb, city economic development consultant, shared their successes in expanding alliances with the Arizona Commerce Authority (ACA), lining up a board, locating tenants and finalizing convention center opportunities. Haass shared their plan to acquire interim space for prospective tenants while the incubator is under development.

“People are finding us,” Haass said of “catalyzing the future” by collaborating with the region, state and nation “to complement Prescott North through conservative but leveraged investment, which will make a difference for the future.”

The center is one of many projects which had been considered, including raises for city employees and relief grants to small businesses.

Raises totaling $588,000 had been budgeted but were put on hold until the council was informed of better-than-expected overall growth in sales tax collection, which came in June.

City Finance Director Mark Woodfill reported that taxable activity totaled $1.8 billion for the last fiscal year. Woodfill also explained that overall sales tax revenues are up 11% from last June, bringing the year-to-date increase to nearly 8%. Only one month showed a decline, he said, with April down 2%. The hard-hit hotels and restaurants were down 21% and 13% respectively from last June, compared to 77% and 51% from April.

“We’re not out of the woods on COVID, but I think it’s safe to say the trends you’re seeing are a lot more positive than imagined,” Lamar said. “That actually talks to the strength of our sales tax economy here that we’re still a destination. We have a socio-economic demographic that has some disposable income and is still spending it. And those are positives for a community that is trying to come out of this.”

Meanwhile, to help downtown business, the Prescott Chamber of Commerce Foundation has launched a “Save Our Bars” campaign to raise $200,000 for $10,000 grants to bars in jeopardy. Donations can be made at prescott.org or 928-445-2000. QCBN