You are here: Home / Local News / Prescott Rodeo Expected to Fill the Stands 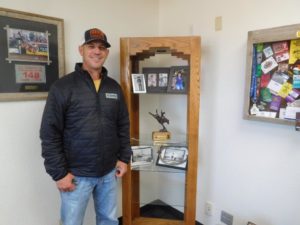 Rodeo officials are planning for capacity crowds at all eight rodeo events this year. New General Manager Jim Dewey Brown says he believes rodeo-goers from all over the country will be ready for some excitement at the World’s Oldest Rodeo, scheduled for Monday, June 28, through Sunday, July 4.

“Not only are we expecting large crowds to see the rodeo, we are already confident we’ll have somewhere around 750 cowboys competing for prizes,” Brown told Quad Cities Business News.

“People are really wanting to get out and come enjoy some traditional Western adventure and hospitality in Prescott,” Brown said.

The Prescott Rodeo began in 1888, when Arizona was a territory. It has become part of a national multi-million-dollar enterprise and is among more than 700 professional rodeos across the 50 states. Brown says Prescott’s is often considered to be in the top 20 professional rodeos in the country.

“What surprises me is that many people in Prescott don’t realize how prominent the reputation of the Prescott Frontier Days is,” Brown said. “This rodeo is a major economic and entertainment engine for the whole region around Prescott.”

It’s not just the rodeo events that attract people to Prescott over the July 4 holiday, a major attraction for people from throughout the Southwest is the annual Rodeo Parade on July 3, through the heart of downtown Prescott. People arrive in the early morning to line the Courthouse Plaza and surrounding streets to enjoy what is ranked the second biggest parade in the Grand Canyon State. This year, the theme is True Western Determination, according to Prescott Frontier Days Chair Kelly Owsley. Local families can enjoy the Kiwanis Kiddie Parade at 9 a.m., July 2.

The Courthouse Plaza will be featuring an Arts and Crafts Show July 2-4. For the hundreds who enjoy putting on their cowboy boots and hats, the rodeo dance is scheduled for the evenings of July 1-3. At 9 a.m., Sunday morning, July 4, a cowboy church service will be provided at the rodeo grounds for those interested in participating.

A first this year is the introduction of the all-local Prescott Frontier Days Rodeo Foundation’s fundraising cookbook. The cookbook, which sells for $10, will be filled with homestyle Western recipes from local families. It also will include stories and anecdotes about the history and tradition of the “World’s Oldest Rodeo.”

The cookbook is dedicated to Karen and Kirsten Vold of Colorado, who have supplied the rodeo with its livestock for 49 years. The Volds will be grand marshals for the annual parade, said Trisha Lewis, marketing director for the rodeo. The foundation also will be selling rodeo posters, t-shirts and other souvenirs.

Brown has been in Prescott since February, having relocated from Socorro, New Mexico, with his wife. “You have no idea how gratified I am to be hired to replace J.C. Trujillo. I’ve known about and admired the Prescott rodeo for years and competed in it from 1995 until 2007.”

J.C. Trujillo retired this past winter.

Brown is no stranger to the Prescott Rodeo. He sports belt buckles from winning the saddle bronc riding championship twice and he has helped time events.

Brown earned his bachelor’s and master’s degrees at Tarleton State University in Stephenville, Texas. Later, he coached rodeo for 13 years at New Mexico State University in Las Cruces and was named NIRA Coach of the Year in 2007. Prior to moving to Prescott, Brown had been the director of the Socorro Rodeo and Sports Complex.

“I’ve long dreamed of being able to live in Prescott and be associated with the rodeo – and here I am,” he said with a smile. “Now, my next biggest satisfaction is going to be seeing people buy tickets for the coming rodeo and all its events.” QCBN

For more information about the rodeo, call 928 445-3103 or email
info@worldsoldestrodeo.com.