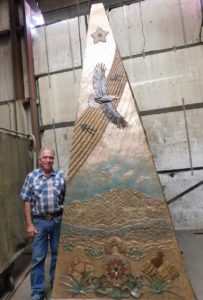 “I want those who see the obelisk to understand what an aesthetically, historically and environmentally rich area this is,” he said.

Called The Jenkins’ Obelisk after the man and family who funded it, the new landmark was formally dedicated Friday, Aug. 28. The site is near the corner of Skoog Boulevard and Lakeshore Drive on the west side of the Prescott Valley Library.

Created by award-winning local sculptor Ed Reilly, the bronze bas-relief artwork is destined to become a new landmark in what was once a dirt trail but now is the most populated incorporated community in Yavapai County, approaching 48,000 people.

Reilly and his wife, Kathy, own and operate the internationally-known Bronzesmith Fine Arts Foundry and Galley at 7333 E. Second St., in Prescott Valley. When he first conceived the obelisk design, he says he wanted to highlight as much as possible the vibrant history that characterized the region for generations. To do so, he decided four panels would carry the message – Granite Mountain Yavapai, mining, ranching and a present and blossoming future.

“Critical to understanding the area’s history is first understanding the contribution of the Yavapai Indians. They thrived in Central Arizona, and their blankets, weaving, tribal artwork – all these reveal their intense relationship with nature and the environment,” Reilly said, describing the delicately patterned designs and patina finish on the first panel.

He did the same with the second panel, noting that in 1983, gold miners changed the culture of Yavapai County. They discovered gold at Lynx Creek near what was to become Prescott Valley. That era brought hard-rock miners, their tools and their animals to some previously ignored areas of the Arizona Territory. A grubby miner is next to a gold-encrusted mine entrance community.

The third panel is rich in detail as it portrays a shift in social, economic and cultural growth. Reilly said the introduction of cattle ranching, arrival of railroads and beginnings of commercial and residential communities forever changed the dynamics of the region. The panel also portrays famous Western silent movie actor Tom Mix, who located his ranch here in the early part of the 20th century. A grinning donkey in the foreground is a reminder of the original Jackass Flats name for the frontier.

The fourth panel is west-facing. Translucent and lighted by a rich glow from the interior, the panel features ascending shapes climbing skyward, symbolizing the upward future for PV and its inhabitants.

The 12-foot-tall bronze panels are supported by a stainless-steel interior skeleton. Panels are mounted on a six-and-a-half foot native granite base, onto which are placed two-by-three foot plaques with descriptive historical copy written by Reilly to explain the various images he created. “I want those who see the obelisk to understand what an aesthetically, historically and environmentally rich area this is,” he said.

Monument Years in the Making

The original call for a commemorative monument came more than six years ago from the PV Town Council. Several artists then submitted proposals. Reilly’s was the one that was accepted. However, it took several more years for the town to raise funds to cover costs for the sculpture. A bit more than a year ago, a generous contribution or more than $100,000 from PV resident Ray Jenkins and his family to the town’s public arts fund finally made it possible to proceed.

“This is the fulfillment of a 20-year dream we on the Commission had,” said Lora Lee Nye, former PV vice mayor, council member and longtime member of the Arts and Culture Commission, who added that the plan is to place art along the streets surrounding the Civic Center. “This gift from the Jenkins family is making that possible. We are delighted with Ed’s depiction of the rich and varied history of our community and we now can share with all.”

For more than a year, Reilly and his team at Bronzesmith have constructed the various panels and welded them to form the obelisk. The complex structure is unlike anything else he has sculpted, he says. He has been creating bronze castings and sculptures since earning his arts degree at Northern Arizona University in 1978. Further, when he founded Bronzesmith, he insisted the structure be large enough to accommodate any artistic creation up to 20 feet tall.

Through the years, he has worked with top national and international artists and sculptors in producing high quality bronze castings. Reilly’s own works are held in public and private art collections and museums across the U.S. and in several foreign countries. QCBN