You are here: Home / Business / Promoting Businesses from the Canyon 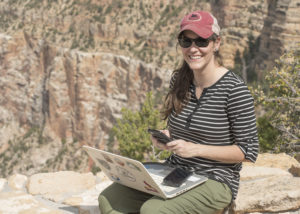 Though the rural setting of the South Rim of Grand Canyon Village can pose a few minor setbacks for running a media consulting business, the good far outweighs the bad for Elise Burnette.

“High-speed internet is the only thing I miss,” said Burnette. “Sometimes I have to head to Flagstaff in the middle of a project to upload the client’s project there in order to meet deadlines. But I knew that moving here and it’s just part of the struggles of operating your business.”

Citing that smaller cities fit her lifestyle, Burnette specializes in graphic design, multi-media and marketing and simply refers to herself as a media consultant. “I’m a full-service provider for everything my clients might need for marketing,” she said. “I create logos, photos, packages, brochures and website design, both back- and front-end management.”

Burnette’s clients include distilleries, equipment manufacturers and a rock band and are based in the United States, Canada, the United Kingdom, and even one in India.

Steven Cage, owner of Cage and Sons Distilling Systems in Alberta, Canada, said, “I trust Elise with all of my media and marketing. She does great work and has increased our business over the years threefold.”

Born in St. Louis, Missouri, Burnette attended Northern Arizona University (NAU), where she met her husband, Chris. “We always wanted to return to this area,” she said. When Chris was offered a position at Grand Canyon National Park, he accepted and their dream was fulfilled.

While at NAU, Burnette studied electronic media, along with career and technical education.  She worked for KNAZ and UTV NAU’s university television station, as technical director, director and chief video editor. “NAU was the only school my mother would allow me to attend,” she said. “She was a graduate of their art department in 1974 and was dead set on me attending there, also.”

In the last 10 years, Burnette and her family have lived in seven different states. “During this time, I went back to school and received a graduate degree in communications.”

An interesting fact about Burnette is that she, along with her husband, owned and operated Shawnee Bend Farms and Coulter & Payne Farm Distillery in Union, Missouri.

“We produced high-quality moonshine, vodka and bourbon in small batches using traditional Appalachian methods and grains that we grew on our own farm,” she said.

That undertaking led the Burnettes to publish a book, “Coulter & Payne Farm Distillery’s 101 Uses For Moonshine,” addressing everything from the history of moonshining to social skills to practical housekeeping hints, medicinal uses, recipes and more.

“Our book features my photography, illustration and design,” said Burnette. “It was really fun to write and incorporate my art and design skills.”

Burnette generally works evenings after her two children go to bed. Her late afternoons are spent hiking along the rim or riding her electric bike with her family.

The Burnettes’ book can be found at schifferbooks.com and Amazon. QCBN