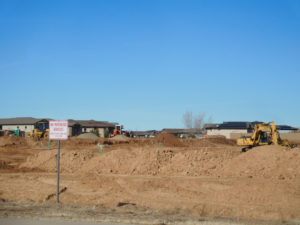 Two parcels of land on the east and the northeast boundaries of Pronghorn Ranch Parkway have been approved by the Prescott Valley Town Council for a 189-lot housing subdivision.

That approval came in late December when town officials reported that decisions regarding traffic control had been resolved.

By a 6-0 vote, with one council member absent, approval was given to the subdivision, which will be called Antelope Park. The amended final plat will permit 189 homes, split on to two pieces of land. Parcel A, as it is called, is on the east side or Pronghorn Ranch Parkway and will contain 82 lots. Parcel B is northwest of the parkway and holds 107 lots.

Approval was contingent upon acceptance of upgrades to several existing roads that were recommended by town officials. The upgrades were based on a detailed analysis and are intended to meet increased traffic that is being generated within the overall area.

Construction will be shared jointly between the Town of Prescott Valley and Yavapai County. Beyond that, other infrastructure updates have been reviewed.

Current property owners are selling the land to Mandalay Communities, Inc. Mandalay Homes is a longtime Arizona builder with a record of constructing solar and energy-efficient homes. The company has several housing subdivisions in the Quad Cities area.

For several years, the land now designated as Antelope Park sat vacant. In 1999, the acreage of which it is a part was annexed by Prescott Valley but was idle for several years. In December 2018, Prescott Valley Planning and Zoning personnel approved a preliminary plat. It was the latter request that resulted in approval of a plat for 189 lots on about 62 acres.

No schedule has yet been announced for when construction will begin in the new subdivision. QCBN