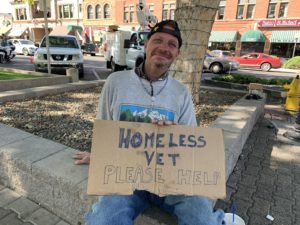 Cory Strache knows the road ahead is about to get a little more difficult.

The Wisconsin native spends a lot of time on the city streets of Prescott. But not by choice.

Strache, 51, is a veteran of the U.S. Marines and one of several hundred homeless residents in Yavapai County who need help as temperatures dip below freezing during the winter months.

Two local organizations – the Salvation Army and the Quad City Interfaith Council – are working to make sure fewer homeless men are out in frigid conditions this winter.

Starting Nov. 1, the Salvation Army will house an emergency shelter in downtown Prescott for men who are homeless in the Quad Cities. The effort, called Operation Deep Freeze, has been made possible with donations from the Quad City Interfaith Council, a local group that advocates for the homeless population of Yavapai County. So far, the Interfaith Council has raised about $6,500 that will go toward operational costs of the shelter. The group’s fundraising goal is $15,000 this season.

Operation Deep Freeze is in its fifth year and started after two residents froze to death on city streets.

Unable to find gainful employment, Strache said he might take advantage of the shelter once winter hits. Two years ago, he became homeless and said he often relies on the Salvation Army for meals.

Blankets and a sleeping bag cover him on warmer nights rather than a shelter roof at the Prescott Coalition for Compassion and Justice, where he once stayed. But he knows temperatures can go from chilly to frosty in a heartbeat.

“[I’d use the shelter] if it came down to it,” Strache said.

But, admittance to the shelter comes with a few requirements. Men are not allowed to smoke in the shelter and each one is given a breathalyzer test before entry. The shelter is first come, first served. There are no guidelines as to how many consecutive nights the men can stay. They are expected to help clean tables after meals. By 10 p.m., the lights are out.

“We try to run something that’s clean, with no problems during the night,” said Salvation Army Capt. Tony Poe. “We want to provide a safe and warm shelter.”

The shelter will run from November to March.

“Sometimes we will be open two to three days,” Poe said. “Then, we will have a week off.”

Molly Freibott, chair of the Quad City Interfaith Council, said she is grateful the Salvation Army is accommodating those in need this winter. She said local members expected Operation Deep Freeze to be housed by a different organization and advocates looked for a new home for the project. When nothing materialized, officials at the Salvation Army stepped up.

The Quad City Interfaith Council is made up of about 40 organizations that continually fundraise for the less fortunate.

“[The Salvation Army] was not going to be able to do it this year,” Freibott said. “But then, they decided they were able to. We are so excited.”

Justin Shaw, 20, is one of the local homeless population. He said he will likely take advantage of the emergency shelter. He recently left a sober living center and said he did not have anywhere to go.

Shaw said he fears the effects of colder temperatures as winter approaches.

“It’s not really safe,” Shaw said. “You can get hypothermia. It’ll kill someone if they don’t have a place to stay or a good sleeping bag.”

Freibott said the shelter is meant to keep people out of hazardous conditions. “They can come in and be safe.”

Those interested in making a donation may do so at https://yavapaiccj.org/donate/. QCBN