You are here: Home / Local News / Racing to Begin Soon at Arizona Downs 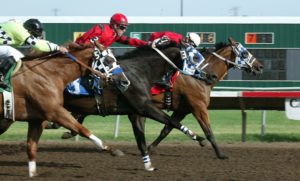 Barring unforeseen difficulties, Memorial Day weekend will have the starter’s gun firing, horses galloping and the announcer shouting, “They’re off!”

In the past five months, experienced racetrack personnel have converted what was a weed-covered, eroded and generally abandoned horseracing complex into one of the most contemporary tracks in the Southwest.

Ann McGovern, general manager for Arizona Downs, is unabashedly enthusiastic about the future of what will be Arizona’s second largest racetrack.

The biggest is Turf Paradise in Phoenix. It operates only during the fall and winter seasons when temperatures are not extreme and dangerous for racehorsing in the Valley of the Sun.

McGovern gave the Quad Cities Business News an exclusive tour of the renovated facilities. All the while, she praised the support and cooperation she has received from consultants, contractors, vendors, laborers and staff in resurrecting the once falling-apart facilities into a coveted destination for horse owners, trainers and, of course, race fans.

“We couldn’t be happier with the general contractor we have, Midwest Construction. But just as important, we are emphatic that we hire local employees and use local vendors and suppliers. We’re a member of this community. We intend to be here a long time,” said McGovern, who lives in Prescott Valley with her family.

She hesitated to cite the precise figure spent in bringing Arizona Downs back into operation after almost 10 years of being moribund. “Let’s just say somewhere between $7 million to $10 million has been put into the economy.”

She stood at the front of the multi-story
grandstand, recently painted in muted earth tones. It also has been reroofed and completely rehabilitated. “Arizona Downs will be as fine a racetrack as you can find in the Southwest,” said McGovern. “We can seat at least 1,000 fans in the bleachers.”

Back inside the totally renovated third floor, McGovern wandered through the 300-person-capacity contemporary dining room, fully equipped for full-service meals as well as buffets. She suggested that eating a “fine meal” while viewing the sweeping chaparral and sage landscape rolling across the horizon was “…as good as it gets. We feature a Sunday brunch that guests tell me is exceptional.”

The dining room also has a full bar. It is adjacent to an event room, which can accommodate up to another 150 people.

“This is a perfect location for a private party, a reception, a wedding – or any other occasion you can think of for a celebration,” she said with a smile, while waving at guests. “We’re happy to help guests plan special events or activities. And I have to tell you – we have what we call a ‘traditional menu, but with a bit of a twist.’”

While construction work has been underway, off-track betting (OTB) has been available daily at 9 a.m. for tracks across the nation. The OTB operation also has connections with Connolly’s Sports Grill and Bull Shooters Sports Bar and Grill in Phoenix, the Museum Club in Flagstaff and Gallagher’s Pub in Lake Havasu City. McGovern said plans are to add more contracted OTB sites.

A New Jersey native, McGovern attended West Virginia University. She later moved to Tucson, where she enrolled in the University of Arizona Race Track Industry program. She has more than 30 years of experience in the horse racing industry.

She echoed what one of the owners, Corey Johnson, had earlier said. “This racetrack is going to have excellent facilities for everyone in the industry. We’ll have an exceptionally safe track. We have more than 1,000 stables for owners and trainers and their horses. We have unlimited parking. And with 90 acres of land, we have a lot of room for future growth.”

Current plans are to have horse races regularly from Memorial Day through September.

She said some races would be for American Quarter Horses, while others would be for thoroughbreds. She noted most races in the Southwest and West are for quarterhorses and are run in yards. Thoroughbred races are measured in furlongs (eight furlongs equal one mile).

“Our track is a mile long and 80 feet wide, so we can have starting gates up to 10 or 12 horses wide. That’s an advantage and race fans love such races,” she said, motioning broadly at the north to south-facing dirt, sand, loam and clay surfaced track.

McGovern emphasized that because Arizona Downs is located in the moderate summer climate of Central Arizona, and in a non-congested area, those in the racing industry would take advantage of such opportunities.

She said staff has already been receiving inquiries from all over Arizona and California, about RV facilities. One RV park is immediately adjacent to the racetrack; several others are within a few miles.

It’s been years since horses last galloped the oval track east of Prescott Valley on Highway 89 A. Formerly known as Yavapai Downs, the racetrack was bought for $3.22 million out of bankruptcy court by J & J Equine Enterprises, LLC. The firm is owned by Phoenix-based JACOR partners (and brothers) Tom, Dave and Mike Auther and their partner, Joe Jackson, along with racing executive Corey Johnsen.

McGovern says the appeal of horseracing is growing. J and Q Equine saw an opportunity to grow the racing industry in Arizona, so they invested heavily in Arizona Downs. “They know that horse racing has historically been a family-friendly sport and its appeal seems to be increasing. It’s affordable, it’s relaxing and it’s safe.” QCBN