You are here: Home / Tourism / Rebranding of Arizona Shuttle – ShuttleU 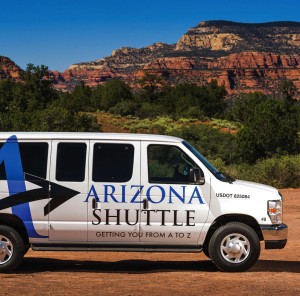 As the old saw goes, the more things change, the more they stay the same. That’s the message coming out of Arizona Shuttle, whose Prescott-based ShuttleU brand is being retired to make room for new company branding statewide.

According to Arizona Shuttle Marketing Director Fred Gould, “What we want to say to our loyal ShuttleU customers is that we’re the same well-run company we were last week, last month, or last year. The only thing that’s changed is the name, and the look of the vehicles.”

Arizona Shuttle acquired ShuttleU approximately two years ago, retaining much of the same operating team. Since then, the company has upgraded the vehicles on the route, put in place new scheduled maintenance and safety procedures, and increased local employment by 100 percent. The service now schedules 18 round-trips daily between the greater Prescott area and Phoenix’s Sky Harbor Airport, using class-leading Mercedes Sprinter vans.

In addition, Arizona Shuttle is the primary provider of ground transportation from Flagstaff, Sedona, Cottonwood and Camp Verde to the Phoenix Airport and other points in metropolitan Phoenix. It also operates a service for tourists between Flagstaff and the Grand Canyon as well as connects Flagstaff with Sedona.

As part of a fresh marketing initiative for 2013/2014, the company has embarked on a new look and feel for the brand, as well as bringing divisions with different names under the Arizona Shuttle umbrella.  The other service affected is Sedona-Phoenix Shuttle, which was acquired by Arizona Shuttle early in 2012.

According to Arizona Shuttle General Manager Jeff Colson, “Not only will the re-branding allow us to unify and consolidate our marketing efforts, it will allow us to build a consistent brand statewide, with all the positive attributes we’ve become known for. At the same time, we’re also unifying and consolidating our operations statewide, to make it easier for our customers to plan their routes, book their travel, and know what to expect on any route we serve.”

The re-branding effort is being handled by Sedona marketing firm Flesch, Pritchard & Peebler (fp2), which also developed the company’s new tag line, “Getting you from A to Z.”

“We’re very happy with the bold new look of our vans, as part of the re-brand,” added Colson.  “These vehicles are moving billboards for us, so we wanted to make sure that they stood out from the rest of the traffic out there and made a positive impression.”

Gould said, “We’ve been fortunate enough to be able to grow even during the recession, so, with the economy slowly improving, tourism on the rise again, and with the continued support of our loyal customers, we’re hopeful that we’ll be able to sustain and even accelerate our growth by attracting new customers under our new branding, and with the new marketing plan.” QCBN

Arizona Shuttle is based in Tucson with offices in Flagstaff, Sedona/Cottonwood, Prescott and Phoenix.