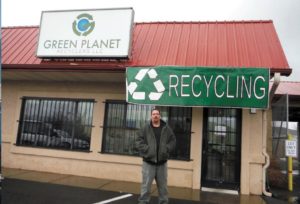 To Christapher Freeman and Damian Rivas, recycling is not about freeing up landfills. It is more about saving the planet for children, grandchildren and the whole future bloodline.

Freeman says the average couple throws away five pounds of trash a day. In a year, Americans toss 220 million tons of trash. “We can’t keep going the way we are going, filling up landfills.”

Freeman and Rivas own and operate Green Planet Recyclers in Prescott Valley.

“It has been open three months and business has been good,” Rivas said. “I’ve had people drop in just to thank me.”

Rivas, 23, is a solid believer in recycling. “The thing is that, honestly, you and I will never have to experience the effect of just throwing things away in a landfill, but probably our grandkids will have to deal with this issue. It’s important to take care of this problem now instead of later.”

Rivas, who grew up in Southern California, says he remembers how his family had three separate bins: “One for garbage, one for cans and one for compost.”

When he moved to Prescott about a year ago, he noticed there was a need for a recycling business. “I saw the opportunity and I just jumped at it.”

Freeman says the company recycles everything except for newspapers, cardboard and glass. But, they are in the process of locating buyers for those items.

“We recycle plastic metal, glass, copper, glass and aluminum. There is a three-page list of things you can recycle,” he said. “You can recycle anything from plastic detergent bottles all the way down the line.”

Green Planet has several ways of in-taking the items. People can drop by with their items without getting out of their cars. “We open their cars or trucks and take it out,” said Freeman.

Then, the items are weighed and the person is paid.

Kim Hines, a regular customer, says she has recycled for 30 years. She appreciates that Green Planet is close by and friendly. “Their customer service is outrageously fun. They are not afraid to talk with you a minute,” said Hines, owner of dragonsalts.com, a food seasoning company. “It is a little extra money and it keeps it out of the landfill. I hate throwing things away in the landfill.”

“We try to make it as user friendly as possible,” said Freeman, 36.

He says the business is the only recycler in the Quad Cities area that recycles plastic. “They [customers] are very happy about that.”

Green Planet also picks up from trash companies and some businesses. They will recycle electronics.

“We have two employees and me,” Freeman said.

Freeman, whose father was in the recycling business, was hired by Rivas as general manager to oversee the day-to-day operations. Rivas manages the administration and marketing efforts.

“We are still relatively small, but growing,” he said of the 2,800-square-foot facility. QCBN