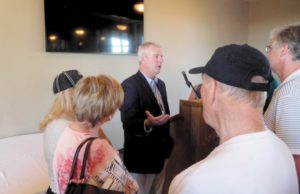 Despite threats of federal budget cuts and an up-and-down national economy, Prescott officials are moving forward with master planning ultimately intended to bring the designation of a “Regional Airport” to Ernest A. Love Field in Prescott.

City officials and several council members stressed that planning was yet in early stages, noting they wanted such planning to reflect sentiments of community residents. For instance, they listened to several dozen residents during a two-hour open house at the Centennial Center located near the airport last month. They explained they wanted to reflect community sentiment as they move ahead with developing a master plan.

Beyond that, Prescott Mayor Harry Oberg and City Council members, as well city staff, are working with elected and civic leaders in other Quad Cities communities who also support the formation of a regional airport.

For instance, Oberg has had conversations with Congressman Paul Gosar, who has voiced support for the concept.

Oberg also has heard from many business and corporate owners who want an expanded airport that can accommodate larger aircraft. Among them is FedEx Sales Director Frank Newman.

Also supportive of airport expansion is Embry-Riddle Aeronautical University Chancellor Frank Ayers. “It is good for everyone involved. It will create solid jobs, it will bring direct and indirect economic development to the area surrounding the airport, and it will create a genuinely regional image for Central and Northern Arizona.”

Agreeing with Newman and Ayers is Ray Johnson, now a Prescott resident, but for 33 years a chief administrator in Chicago for the National Aeronautic Association. “Expansion of Love Field into a regional airport will have dramatic positive impact for the entire area,” Johnson said.

According to John Cox, airport manager for the City of Prescott, achieving the designation of a “Regional Airport” fundamentally means that such an airport serves air traffic in lightly populated geographic areas, not major metropolitan locations like Phoenix, Denver or Las Vegas.

Cox said he was not especially concerned over the recent announcement from the federal government that airport subsidies for smaller airports might be in jeopardy. Specifically, he said that every year, word comes out of Washington, D.C. that the Essential Air Service (EAS) program will be drastically cut or eliminated from the budget.

Congress has routinely overridden such proposals, especially for smaller rural areas that would be seriously jeopardized if air service were eliminated, Cox said.

“I’m not really concerned about it,” he said. “Great Lakes Airlines has a two-year EAS contract that runs through May of 2019. That amounts to about $2.6 million annually in subsidies to keep our commercial air service coming to this airport. Based on what we’re now seeing, our commercial air traffic to and from Prescott is going to continue to increase. What that means is that the more people we have flying on GLA, the less we’ll need subsidies.”

GLA President Chuck Howell said that in his view, the Prescott airport is probably not one of those in danger of losing a subsidy. Howell’s office is in Cheyenne, Wyoming.

“It’s a very complex subject. But every president the past three administrations has made the same statement. While there are clearly some overhauls that need to be made to the EAS program, we do not see it as something that will be eliminated entirely.”

Prescott City Councilman Steve Sischka also said he was not concerned that EAS subsides would be taken from Prescott. “I’m one of those guys who believes, ‘If we build it, they will come.’ We’re getting support from all the surrounding communities, and we’ll all benefit from the increased business and growth that will result from having a modern regional airport.”

Plans for expansion are ongoing over the next 18 months. The cost for the master plan is estimated at $950,000, with 95 percent of that to come from a Federal Aviation Administration grant, Cox said. He said the city would be responsible for about $23,000, which would come from the airport fund.

City officials have said they hope to have a sustainable, flexible and realistic plan that will meet aviation needs in the area for the next 20 years. QCBN