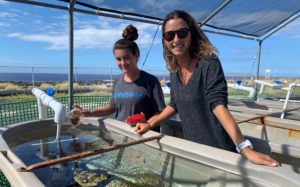 A third of a mile off the west coast of Hawaii in Makaiwa Bay, bright white-violet pops of color almost glow from the seafloor some 30 feet below the surface in comfortably warm water. Although pleasant and beautiful to humans, neither the ocean temperature in October nor the color of the coral is a healthy sign.

Sandra Romer dives down to point out skeletons of cauliflower coral. To communicate mortality, she makes an underwater gesture with her hand across her throat. Nearby, she finds a creamy-amber cluster that is mostly alive and offers a thumbs-up.

“The white color means the algae have left the coral,” said Romer, the general manager of Legacy Reef Foundation (LRF), who, with her husband, Dominic, a diver and professional photographer, transplanted from Flagstaff to Kona in June.

While effortlessly treading water, she offers an explanation. “The algae give coral their color and provide the corals their primary food through photosynthesis. They have a symbiotic relationship. When you see white, it means the coral is starving. It’s called bleaching.”

Bleaching events caused by warming sea temperatures have been particularly deadly in recent years, but scientists say reefs have suffered heavy degradation since the 1970s. “Some 25% to 40% of the world’s corals have been lost in the last 40 years,” said Zac Forsman, Ph.D., a research associate at the University of Hawaii Institute of Marine Biology and scientific advisor for Legacy Reef.

Business consultant Bill Coney is a diver who grew up in Hawaii. “As a child and a young adult, I remember the coral reefs and marine life thriving and abundant. As I got older, particularly in the last 20 years, I saw a sharp decline in the marine life and coral reefs, to the point that our reefs today are only a shadow of the reefs I remember.”

When he retired a few years ago from the tech world, he wanted to do something to restore a small patch of reef near where he lived. “I wanted to be able to take my grandkids diving to show them ‘Papa Willie’s’ reef so they could experience a small taste of what I experienced when I was their age.”

His vision for reef restoration tsunamied beyond “a small patch” when he met retired anesthesiologist Susanne Otero at a beach cleanup event. “Given her medical background, I knew that if we teamed up – with her understanding of medicine and biology and my business background – we would make a perfect combination to build a world-class coral restoration lab. A few days later over coffee, I asked her to join me in forming what would become Legacy Reef Foundation.”

In March 2018, they opened their first coral nursery and restoration lab at the Natural Energy Laboratory of Hawaii Authority (NELHA) near Kona on the Big Island. There, a team headed by Romer provides tours and educational presentations, and recruits conservation partners in reef restoration.

A Foundation for Life

The traditional Hawaiian Hymn of Creation, the Kumulipo, has long taught that reef life is the foundation for all life. Science tells us that coral reefs are important because they contain some of the most diverse ecosystems, protect coastlines from storms and provide habitat and shelter for marine organisms like algae, which produce oxygen. They also boost local economies through tourism and provide a hunting ground for coastal villages where fishing is a way of life.

However, there are a number of stressors weakening coral. One of them is a warming ocean.

“Every time we have a heatwave, it’s chipping away at the fabric of the coral ecosystem, and we’ve had severe losses in Hawaii,” said Greg Asner, Ph.D., founder of Arizona State University’s Center for Global Discovery and Conservation Science. “The heatwave in 2014 was weak; the one in 2015 was a monster. We lost 30% of the coral reefs in Hawaii; some areas lost 90%. In 2019, we got super scared as temperatures were higher earlier in the summer than in 2015.”

Last month, Asner and other scientists came up for air when the State of Hawaii Department of Land and Natural Resources reported coral bleaching was not as severe as predicted for 2019, but still widespread. Asner says 2015 was “like turning the temperature on high and letting it burn, compared to a long slow simmer this past summer.”

With ASU’s new satellite imaging system, the Allen Coral Atlas (named for Microsoft’s Paul Allen), Asner and his team are building the world’s first coral bleaching monitoring system. It was used for the first time in October across the Hawaiian coastlines.

Through a combination of satellite imaging and new technology Asner uses on aircraft – imaging spectroscopy, which records ocean depths and live and dead corals by measuring photons from sunlight that bounces off the seafloor – Asner says an accurate assessment can now be obtained about the amount of damage to coral reefs.

“This is the first time this [seafloor mapping] has ever been done where we can see the good, the bad and the ugly,” he said.

Romer says this is a start, but she notes other sunscreen chemicals are deadly as well, such as avobenzone and homosalate. “The ‘Reef Safe’ label on the bottle can be misleading. Basically, avoid sunscreens with ingredients that you can’t pronounce.”

A Sunscreen Use Assessment in Hawaii conducted by social scientist Arielle Levine, Ph.D., with the National Oceanic and Atmospheric Administration (NOAA) Coral Reef Conservation Program was concluded last March. Findings revealed that about 30% of survey respondents on Hawaii’s beaches were using sunscreens containing oxybenzone and/or octinoxate. Levine noted that most were willing to switch to reef-safe products, especially if they were reasonably priced and provided a high SPF.

People unintentionally damage coral. Marine biologist and dive guide Olivia O’Neil says many people do not know the coral is a living animal. “You’ll see them standing on it, handling it, kicking it. They don’t know they’re hurting it.”

On board to deliver the message of how to behave around coral reefs are Hawaii’s sea-going excursion companies like Body Glove, Sea Paradise and Fair Wind Cruises, which provide an educational component on their tours, along with reef safe sunscreen.

Tropical fish, including yellow tang, angel fish and moray eels, are captured from Hawaiian coasts to swim in aquariums someplace else.

Snorkel Bob’s website says 90% of fish found in glass tanks around the world are taken from the wild. “This devastating practice results in severe mortality rates from the point of capture through handling, shipping and acclimation,” it states.

“A lot of the fish they take are herbivores that the coral needs to eat back the algae that grows thick during these heatwaves,” said Asner. “If you watch yellow tang, you’ll notice they’re grazing. They’re eating the algae on coral.”

Both Forsman and marine biologist David Vaughan, Ph.D., discovered and co-published a method to grow corals up to 40 times faster than observed in the wild. Vaughan has been studying and experimenting with coral for decades at the Mote Marine Laboratory in the Florida Keys. By accident, he learned that if they are cut, they heal themselves, much like our skin grows back over a wound.

In a TEDx Talk, Vaughan explains how pieces from the same parent will grow together and create a much larger, more mature coral in a fraction of the time it would take for the animal’s natural process of spawning in the wild. Even dead reefs, he says, can be brought back to life through microfragmentation and replanting. “We can put 500 cloned pieces on and in two years get them to touch and we are literally bringing a half-a-century coral back to life in a couple of years.”

Forsman, who studies coral genetics and cultivation on Oahu, stumbled on microfragmentation as well at the Waikiki Aquarium and Kewalo Marine Lab. “I’ve been working for the past 16 years to develop coral as a model organism so we can learn more about it. Corals are basically colonies of thousands of interconnected individual mouths, like tiny upside-down jellyfish with specialized algae in their tissue that grow structures that are very similar to bone. Since they are colonies, each fragment is a genetic replica, [which] means you can do all kinds of interesting experiments. There’s a lot of mystery about coral. I think it’s the closest we can get to studying aliens from another planet.”

Coney and Otero foresee Legacy Reef providing others with resources and assistance to help restore coral reefs. “We are hoping to address the challenge of scaling up restoration efforts,” said Otero. “To be effective, restoration and preservation of coral reefs need to be a global effort, and still follow rigorous scientific methods. The research projects at NELHA will allow us to design restoration and preservation labs that are low cost, and develop easy-to-apply protocols that follow best scientific practices.”

Legacy Reef cannot legally ship living animals (coral), but the team can send tools and directions to build a coral nursery, and provide access to researchers. The plan is to load up 40-foot shipping containers with items like lights, pumps, solar panels and instructions and send them to places such as Fiji, where reefs are struggling and communities depend on coastal marine life for their livelihood. Each outfitted seacan is expected to cost about $150,000.

Coney and Otero foresee Legacy Reef making substantial progress by 2030. “Within 10 years, we hope to take our coral restoration technology through our containerized coral nursery program and set up 100 or more remote restoration lab facilities around the world,” said Coney. “With these efforts, we could see thousands of hectares of dead or damaged reefs brought back to life in key areas where coastal populations depend on their reefs for food.”

Meanwhile, as snorkelers delight in the beauty off Hawaii’s west coast, Romer observes the subtle signs of a struggling underwater ecosystem and teaches others about the value of the planet’s coral reefs. QCBN

For more information, visit LegacyReefFoundation.org or contact Romer at sandrar@legacyreeffoundation.org