You are here: Home / Community Profile / Retiring the Voice of County Health 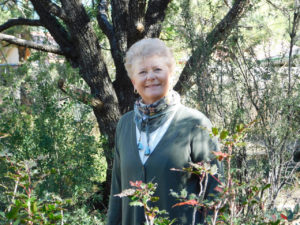 Some may think only the past couple of years have been truly challenging for those involved in public and community health.

Terri Farneti likely will disagree with those folks. She’s been directly involved with public health issues for the past 16 years. It was only two months ago, in fact, that she retired from the intensity of those pressures escalated by the pandemic. Before that, other health concerns kept her constantly reacting.

For 16 years, Farneti has been integral in alerting residents about the full range of healthcare issues that permeate the various county communities.

She started her career with Yavapai County Community Health Services (YCCHS) in December 2005 as an administrative assistant to the assistant director of public health. Through the next few years, she demonstrated abilities and skills that resulted in rapid promotion to positions of increasing authority and responsibility. Hence, when the H1N1 virus – sometimes called the “Swine Flu” – ravaged the world’s population from 2009 until fall 2010, she was directly involved with identifying, developing and supporting vaccination clinics utilizing hundreds of volunteers throughout the county. “This was a massive effort, and the county had not previously done anything quite like it,” she recalled.

Not long after that, she was part of the YCCHS team that developed the very first Community Health Assessment Implementation Workplan. That effort, which began in 2012, led to the department’s becoming an applicant for the National Public Health Accreditation in 2015. “This was a huge project, and we had 197 items we had to document and submit for review to receive accreditation. But we got it in March 2016,” Farneti said.

In 2017, when Leslie Horton was named department director, Farneti was promoted into a position as special projects coordinator. Horton said Farneti soon became involved in grant writing and coordinating many of those areas of knowledge and expertise that assured the department was operating smoothy. She later was given public information duties.

Horton said during the pandemic, the YCCHS activated a Public Health Emergency Response. “Terri’s work quickly and drastically changed as the public information officer. She gathered information, issued press releases and Facebook posts and whatever other means of information she could find to inform the pubic of the latest COVID 19 data. Terri was our ‘go-to’ person for information for the media.”

Farneti explained, “When the pandemic hit in January 2020, we’d never faced anything like it. It took all the talent from throughout the YCCHS to establish the Emergency Operations Center. I feel so fortunate that I was in a team atmosphere that made positive things happen. In spite of it all, YCCHS applied for re-accreditation in January 2021. We all cooperated and managed to submit our reapplication for accreditation on June 1, 2021.”

Not Always in Health Service Disciplines

Farneti, a native of Wayland, a small town in west central New York, earned her degree in hotel and restaurant management from Rochester Institute of Technology. She has more than 40 years of experience in the restaurant and hospitality industry, ranging from small operations to working for the Marriott Corp. in New Jersey and at major hotels in New Jersey, Atlanta, Georgia and Hilton Head, South Carolina. She met her French-born husband Maurice when they both worked at the L’Auberge Chez Francois in Great Falls, Virginia. They moved from there to Washington, D. C., where they worked at the prestigious Hay-Adams Hotel in catering, which Farneti calls, “a highlight of my hospitality career.”

In 1998, they moved from D.C. to Prescott, where they purchased a coffee shop on Gurley Street they renamed “Provence.” A couple of years later, Farneti accepted a position at Yavapai College, where she held dual administrative roles as a member of the Leadership Center Team and a staff member for the Office of Government for Northern Arizona. When Yavapai College downsized those units, she applied for and was hired by YCCHS, where she worked and advanced for 16 years.

“As much as I enjoyed my work for the county, both at the college and most recently, health services, I confess my husband, Maurice, and I enjoyed some other marvelous experiences here in the community and the state. I especially enjoyed my community organization experiences—the Prescott Area Leadership Class, Big Brother-Big Sisters as a “big” for 14 years, the Launch Pad Teen Center and most important, the League of Women Voters for Central Yavapai County.”

NOW THAT I HAVE MORE TIME

Maurice and I want to climb into the Dodge Sprinter camper van we bought and see some new country – anywhere we want to go. I especially want to go back East to see friends and family we haven’t seen since we moved out here 24 years ago.

How’s this for opposites: St. Patrick’s Day and Halloween. I guess it’s because I love the Irish heritage I have, but I also love being incognito in my costumes for Halloween.

I observed so many of my colleagues these past few years putting in extra hours of work, trying to help people understand just how severe and serious these epidemics and pandemics are. Sometimes they were treated inappropriately and unfairly. The reality is, they need to be praised and admired.

I’ve done far more than I ever thought I would do. I’ve worked with some tremendous friends and leaders. I gained far more than I ever expected. But now it’s someone else’s turn to gather information and attend meetings and take responsibility. I just hope they are as lucky as I have been. QCBN